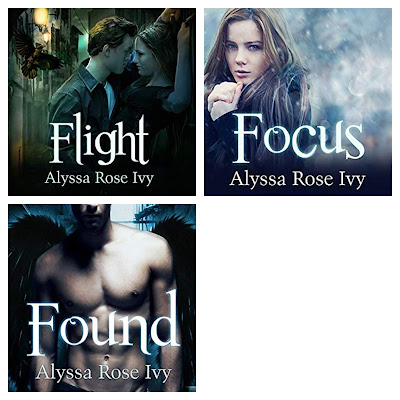 Flight: Sometimes you just have to take flight.

A summer in New Orleans is exactly what Allie needs before starting college. Accepting her dad’s invitation to work at his hotel offers an escape from her ex-boyfriend and the chance to spend the summer with her best friend. Meeting a guy is the last thing on her mind—until she sees Levi.

Unable to resist the infuriating yet alluring Levi, Allie finds herself at the center of a supernatural society and forced to decide between following the path she has always trusted or saving a city that might just save her.

Focus: Freshman year of college is hard even when you're not tied to the future king of a supernatural society.

Allie dives into college head first with Hailey as her roommate and the city of New Orleans as her backyard. As things within The Society heat up, Allie realizes that whether she's with Levi or not, she's in far too deep to turn back.

Found: Levi might be hot and strong and have a cool set of wings, but it's not enough to make up for keeping Allie in the dark. Allie's tired of being left with more questions than answers. She's tired of loving a guy who refuses to level with her. Most of all she's tired of her life spinning out of control.

Desperate to save Jess no matter the personal cost, Allie has to face the possibility that the only one she can trust is herself.

I liked this shorts series.  Full of supernatural hotness set in the best city for anything otherworldly, New orleans, LA.  When Allie meets the cocky Levi she is instantly drawn to him and him to her, when she finds out that he isn't human and has a cool set of crow wings things get even better but when Levi gives her a gift, failing to tell her of its significance things start to spiral out of control.

In book 2 Focus Allie is trying to come to terms with her new position in the supernatural world, not sure if she can forgive Levi for his deception but still drawn to him like a moth to a flame. Her ex boyfriend Toby doesn't seem to be able to take a hint either stalking her and making my skin crawl every time they interacted.

In book 3 Allie figures out that her attraction to the supernatural might not just be a coincidence. It is also putting her loved ones in danger but she is tired of being a pawn in someone elses game and decides to take control of her destiny, and also give in to her desire for her hot sexy man with the black wings.

This is a fun series and I couldn't stop listening, I think I blew through all three of these in a day. There is a fourth book that is the same story told from Levi's perspective that I am saving for another time. Good fun mind candy. While there is quite a bit of sex and violence in these books they are definitely geared toward a YA audience.