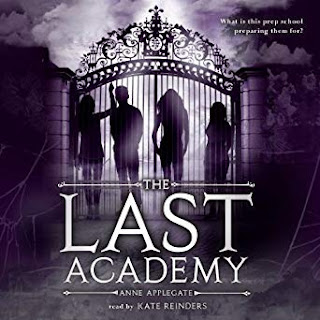 Camden Fisher arrives at boarding school haunted by a falling-out with her best friend back home. But the manicured grounds of Lethe Academy are like nothing Cam has ever known. There are gorgeous, preppy boys wielding tennis rackets, and circles of girls with secrets to spare. Only...something is not quite right. One of Cam's new friends mysteriously disappears, but the teachers don't seem too concerned. Cam wakes up to strangers in her room, who then melt into the night. She is suddenly plagued by odd memories, and senses there might be something dark and terrible brewing. But what?

This is the debut novel from Anne Applegate and its a really great story.  There is a bit too much teenage angst but given that this is a YA book geared toward that audience I can let it go.  Camden Fisher is the only one of her family to be sent off to boarding school. When she gets there things start to get strange. Kids start disappearing and the teachers seem to be hiding something.  There is a creepy old man who is a benefactor of the school whom Camden met on the plane while she was coming to the academy.  He seems to have a liking of young girls and there is just something else creepy about him.