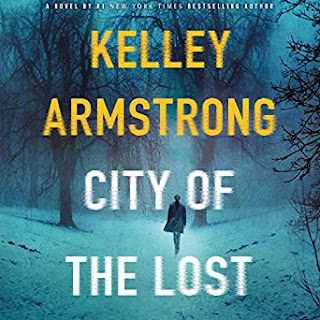 Casey Duncan is a homicide detective with a secret: when she was in college, she killed a man. She was never caught, but he was the grandson of a mobster and she knows that someday this crime will catch up to her. Casey's best friend, Diana, is on the run from a violent, abusive ex-husband. When Diana's husband finds her, and Casey herself is attacked shortly after, Casey knows it's time for the two of them to disappear again.

Diana has heard of a town made for people like her, a town that takes in people on the run who want to shed their old lives. You must apply to live in Rockton and if you're accepted, it means walking away entirely from your old life, and living off the grid in the wilds of Canada: no cell phones, no Internet, no mail, no computers, very little electricity, and no way of getting in or out without the town council's approval. As a murderer, Casey isn't a good candidate, but she has something they want: She's a homicide detective, and Rockton has just had its first real murder. She and Diana are in. However, soon after arriving, Casey realizes that the identity of a murderer isn't the only secret Rockton is hiding—in fact, she starts to wonder if she and Diana might be in even more danger in Rockton than they were in their old lives.

I got hooked on this series when I received book 4 from Netgalley.  I really liked it and loved the characters and the whole concept of this town in the middle of the Yukon that houses people who are running, running from the law, running from abuse or just need to be missing. Although book 4 told me a lot of what had already occurred in Rockton I wanted to read about it for myself so I got books 1-3 on audio.

Casey and her best friend Diana are both running from their past.  Casey from a bad decision after she is badly attacked in an alley and Diana from her abusive husband. They both apply to Rockton to try to start anew. Although it might not be too new for Casey since she is brought to Rockton to be a detective, and her first case makes her realize just how dangerous this town can be. In the middle of the wilderness with no phones, no electricity and no comforts of 20th century this is detecting like it was done before international databases, fingerprint bases and other CSI stuff.

I loved this book and it really gives you a great introduction to this town. If I could have read the beginning of this series from the start I think I would have been even more in love with the latest book.  The character development is great and the plot is a new one for me. I highly recommend this series.