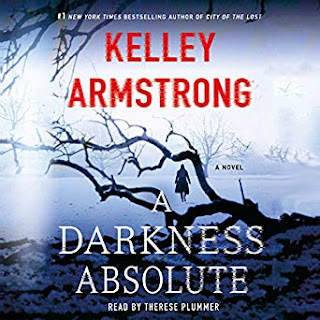 When experienced homicide detective Casey Duncan first moved to the secret town of Rockton, she expected a safe haven for people like her, people running from their past misdeeds and past lives. She knew living in Rockton meant living off the grid completely: no cell phones, no Internet, no mail, very little electricity, and no way of getting in or out without the town council's approval. What she didn't expect is that Rockton comes with its own set of secrets and dangers. Now, in A Darkness Absolute, Casey and her fellow Rockton sheriff's deputy Will chase a cabin-fevered resident into the woods, where they are stranded in a blizzard. Taking shelter in a cave, they discover a former resident who's been held captive for over a year. When the bodies of two other women turn up, Casey and her colleagues must find out if it's an outsider behind the killings or if the answer is more complicated than that...before another victim goes missing.

You never know what you are going to find when you wander in the Yukon wilderness. When Casey and her fellow deputy Will chase after a run away resident they seek shelter in a cave that holds more than just shelter. Finding a young woman in a hole in the middle of the cave who had been missing and presumed dead from Rockton several years ago Casey now has a new mystery to solve.

Rockton is not a place for the faint of heart.  It is rustic, no electricity, no wifi, and no phones. If you go out in the woods there is a good chance you will get lost and not find your way back. Rockton is full of characters but other than Casey and her hunky wilderness raised boyfriend the Sheriff I think that Mathias the French Canadian butcher is by far one of the most interesting. Full of secrets and a bit creepy Mathias and Casey really bond in this book.

I love the scenes Armstrong sets, she really puts you in the forest with these characters. I'm so happy I found this series.