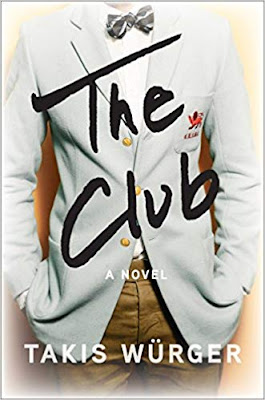 The Club is a blistering, timely, and gripping novel set at Cambridge University, centering around an all-male dining club for the most privileged and wealthy young men at Cambridge and following an outsider who exposes the dark secrets of this group, the Pitt Club.


As a boy, Hans Stichler enjoys a fable-like childhood among the rolling hills and forests of North Germany, living an idyll that seems uninterruptible. A visit from Hans’s ailing English aunt Alex, who comes to stay for an entire summer, has a profound effect on the young Hans, all the more so when she invites him to come to university at Cambridge, where she teaches art history. Alex will ensure his application to St. John’s College is accepted, but in return he must help her investigate an elite university club of young aristocrats and wealthy social climbers, the Pitt Club. The club has existed at Cambridge for centuries, its long legacy of tradition and privilege largely unquestioned. As Hans makes his best efforts to prove club material and infiltrate its ranks, including testing his mettle in the boxing ring, he is drawn into a world of extravagance, debauchery, and macho solidarity. And when he falls in love with fellow student Charlotte, he sees a potential new life of upper-class sophistication opening up to him. But there are secrets in the club’s history, as well as in its present—and Hans soon finds himself in the inner sanctum of what proves to be an increasingly dangerous institution, forced to grapple with the notion that sometimes one must do wrong to do right.

This book seems to be Wurger's first book translated into English.  His other novels are still in German.  Hans is a socially awkward boy who has been deeply affected by the death of both of his parents in a short time frame and his aunt putting him in a boarding school. While at school Hans got proficient at boxing and as he gets ready to graduate his aunt comes to get him saying she needs help.  She wants him to go undercover in one of the wealthy Social clubs at Cambridge but she won't tell him why.

This is a well written, intricately plotted book.  There are layers to this book that unfold as you go. Chapters are broken down by different characters giving a different perspective for what is going on. However there is an Asian character that just always felt out of place.  I'm not sure what Wuger was attempting with this character other than to show how hard it is for non-whites in this very upscale elite club scene.

The privileged don't believe they play by the same rules as everyone else and even once things are starting to fall into place you know that things are never really going to change, that things will be brushed under the rug and continue status quo. White privilege and power play a huge part in this game of whose who and if you fit the profile you have the choice to straddle the line that is good and evil.

Well received in Germany I think Wurger is a name to keep an eye on. I hope more of his work gets translated if its as good as this one was.