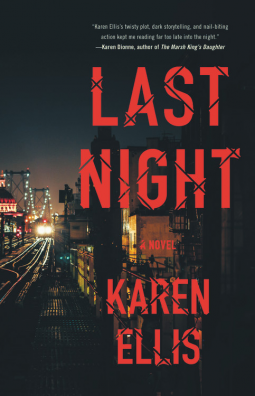 One of the few black kids on his Brighton Beach block, Titus "Crisp" Crespo was raised by his white mother and his Russian grandparents. He has two legacies from his absent father, Mo: his weird name and his brown skin. Crisp has always been the odd kid out, but a fundamentally good kid, with a bright future.
But one impulsive decision triggers a horrible domino effect—an arrest, no reason not to accompany his richer, whiter friend Glynnie on a visit to her weed dealer, and a trip onto his father's old home turf where he'll face certain choices he's always striven to avoid.

As Detective Lex Cole tries to unravel the clues from Crisp's night out, they both find that what you don't know about your past can still come back to haunt you.

I really enjoyed this book, Ellis takes us on an adventure with three teenagers.  Crisp, is bi-racial who has lived his life with his white mother going to the best public school and becoming valedictorian of his class. Glynnie, is a rich white girl who thinks going to the buy weed in Red Hook is an adventure.  She doesn't understand danger and thinks her money will get her out of anything. Then there is JJ, a young undocumented Haitian boy whose parents were deported and he ran away from an abusive foster home. He sells weed to keep himself fed and his goal is to attend school and get into a good high school.

Glynnie's arrogance, privileged and sheltered life lead them into a dangerous situation that has a major impact on their lives. Crisp's mother makes some profound and enlightening commentary on race and racial profiling etc while waiting for her son to be found. The cops who are looking for the teens, Lex, a recovered addict who got in a fight with his boyfriend right before he got called in on this case, and Saki who no one in her precinct understands and may be on the autism spectrum with the way she is so concrete and doesn't understand social norms really help round this book out.

I love the characters the very relevant topics and the interesting unraveling of this story through the eyes of all involved. There is another book in this series but this can be read as a stand alone although I liked it so much I'm going to find the first and dive in. Can't wait for more from this author and this series.