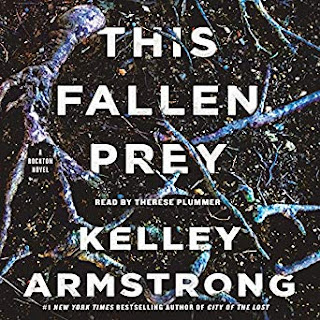 Casey Duncan is about to face her toughest job as police detective in Rockton yet.
When Casey first arrived at the off-the-grid town, an isolated community built as a haven for people running from their pasts, she had no idea what to expect, with no cell phones, no internet, no mail, and no way of getting in or out without the town council’s approval. She certainly didn’t expect to be the homicide detective on two separate cases or to begin a romantic relationship with her boss. But the very last thing she expected was for the council to drop a dangerous criminal into their midst without a plan to keep him imprisoned, and to keep others safe.

Of course Oliver Brady claims he's being set up. But the longer Brady stays in town, the more things start to go wrong. When evidence comes to light that someone inside Rockton might be working as his accomplice, helping him to escape, Casey races to figure out who exactly Brady is and what crimes he’s truly responsible for committing.

In the next page-turning entry in Kelley Armstrong’s gripping series, life in Rockton is about to get even more dangerous.

This is one of the strongest books in the series so far. When Oliver Brady is forced upon the small town of Rockton, a town that doesn't exist life will be forever changed.

The Council has allowed a serial killer into Rockton, and its all for financial gain. Oliver claims he is innocent and is being set up by his step-father but bodies keep dropping, people you thought you could trust seem to betray you, and the settlers and hostiles who live in the forest seem to be growing restless.

This book is truly a cat and mouse game, is Oliver innocent? Was he set up? Who is helping him? So many questions and the answers may surprise you. Since I read book 4 before this one I knew most of it before I started reading but Oliver's story line and that of the Settlers was intriguing and frightening. Oliver's presence continues through book 4 and maybe beyond but this book truly brings to light how man truly is the most ruthless predator on the planet.

Another really well thought out book with a strong story line. Now that I've caught up with the series I'm anxious for a new one!