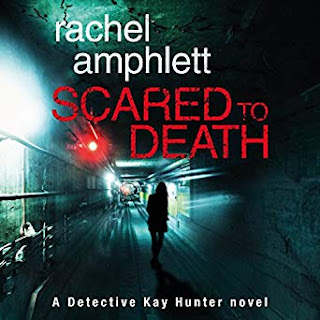 "If you want to see your daughter alive again, listen carefully."

When the body of a snatched schoolgirl is found in an abandoned biosciences building, the case is first treated as a kidnapping gone wrong.

But Detective Kay Hunter isn't convinced, especially when a man is found dead with the ransom money still in his possession.

When a second schoolgirl is taken, Kay's worst fears are realized.

With her career in jeopardy - desperate to conceal a disturbing secret, Kay's hunt for the killer becomes a race against time before he claims another life.

For the killer, the game has only just begun....

Scared to Death is the first book in a new crime thriller series featuring Kay Hunter - a detective with a hidden past and an uncertain future....

This is a spooky police thriller.  The death of a young girl turns into anything but a straight forward kidnapping. Kay Hunter is on the case of trying to find the killer. This is the first book of this series but before this book Kay had been under investigation by internal affairs. Despite being exonerated there is still suspicion and animosity from some of the higher ups which makes her job all the more difficult.

I love that Kay seems to have a stable supportive marriage despite her crazy work schedule.  In so many police procedural the people are either in dysfunctional relationships or divorced.

This is a well written book and the crime has that added creep factor that makes it a quick read.