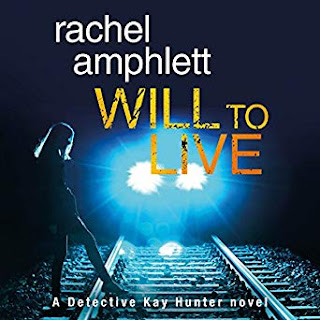 Reputation is everything.
When a packed commuter train runs over a body on a stretch of track known to locals as "Suicide Mile", it soon transpires that the man was a victim of a calculated murder.

As the investigation evolves and a pattern of murders is uncovered, Detective Sergeant Kay Hunter realizes the railway's recent reputation may be the work of a brutal serial killer.

With a backlog of cold cases to investigate and attempting to uncover who is behind a professional vendetta against her, Kay must keep one step ahead of both the killer and her own adversaries.
When a second murder takes place within a week of the first, she realizes the killer's timetable has changed, and she's running out of time to stop him....

Kay Hunter is back and this time the murder really creeped me out. Victims are being found drugged and tied or someone bound to the train tracks. They wake up just in time to realize their predicament and see the train barreling down on them.

This is a faced paced thriller with multiple suspects and good character development.  We are really getting to know Kay and her colleagues and the more we know the more I like them. Kay is still not trusted due to a prior investigation into missing evidence in a case but she was found innocent. However not everyone believes she really is innocent which makes Kay's job all the more difficult.

These books are a quick read and highly addictive.