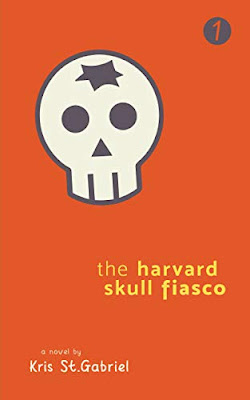 Meet Shea. He's difficult—he suffers from pathological problems with authority and an unrepentant truthfulness. When he's not fixing computers in the library at Harvard Medical School, he's tormenting middle managers, and feuding with his boss. But where in the Harvard employee manual does it say you have to behave perfectly at all times?

When one day he uncovers the administration's secret plot to replace the library with a Starbucks cafe, Shea decides to stop them. He soon finds himself on a collision course with just about everyone, including a vivacious librarian named Astrid who doesn't quite agree that stealing the world's most famous skull is the best way to save a library. What follows is a comical and heart-warming tale of a misfit breaking all the rules in his quest to become a better person.

This is an off beat mystery comedy. Right from the start you know what happened but the main character Shea is hilarious.  He wants to be a great thief but he suffers from problems with lying.  He can't seem to do it.  Shea believes that stealing the famous skull that resides in the Harvard library will prevent the school from replacing it with a starbucks.  His intention is to save the library which he holds in very high regard.

This book reminds me of those by Carl Hiaasen, The same twisted sense of humor and wit. This book is utterly engaging and fun. Quick paced with quirky characters.