Skip to main content
Labels
Posted by Heidi (ReadingGrrl) May 15, 2019

Book Review: Holding out for a Hero (Jelvia: Not Human Book 1 by TE Kessler 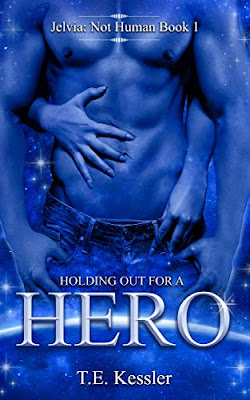 Primal. Savage. Untamed.
An alternate Earth where humans live alongside another species.
When she was twelve years old, her mother was murdered—and ever since Macy Shaw had been subconsciously searching for a hero to protect the defenceless.
But the hero she found was a Jelvia—a species deadly to humans.
When her friend was rescued by a Jelvia, Macy used her connections as a journalist to go after the biggest story of her life.
Narcifer saved a woman by merely being Jelvian—his presence striking terror in the hearts of the men who were attacking her.
So when a red-headed reporter not only began asking questions about his ‘heroism’ but brazenly offered her business card, his interest was piqued.
Narcifer was tracking a scientist who had been imprisoning and conducting experiments on Jelvias—but no matter where Narcifer’s line of investigation took him, he was always brought back to the red-headed journalist, Macy Shaw.
Was she involved? If so, she was guaranteed to die.
His orders were to track Macy.
But he went one step further.

I wasn't sure if I was going to like this book but I really did.  It was a fun sexy read. Jelvia are a new species and humans are terrified by their silver eyes and ability to spit venom.  Rarely do humans interact with Jelvia as they are taught by the media to fear them. Jelvia do hunt humans and kill them but only after careful research and after the human in question has been deemed dangerous to society at large. Most Jelvia reside on 3 islands or incognito in cities occupied by humans. The only thing that distinguishes them is their height, silver eyes, and the uniform they seem to wear.  When they wear regular clothes and sunglasses its hard to distinguish them from human.

Macy has always been fascinated by Jelvia, when the opportunity to interview one is presented to her she jumps at it and finds herself in the middle of something she didn't bargain for.  Being used as a pawn by a human and under investigation by the Jelvia, Macy and the Jelvia Nacifer find they may have more in common than they thought.  Inexplicably drawn to each other Macy and Nacifer defy convention and try to form a relationship.