ARC Book Review: We Were Killers Once (Brigid Quinn book 4) by Becky Masterman 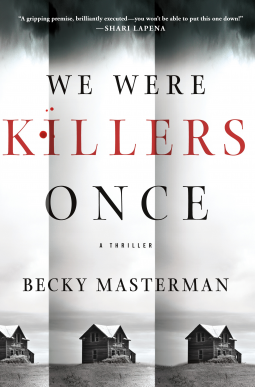 In 1959, a family of four were brutally murdered in Holcomb, Kansas. Perry Smith and Dick Hickok were convicted and executed for the crime, and the murders and their investigation and solution became the subject of Truman Capote's masterpiece, In Cold Blood. But what if there was a third killer, who remained unknown? What if there was another family, also murdered, who crossed paths with this band of killers, though their murder remains unsolved? And what if Dick Hickok left a written confession, explaining everything?

Retired FBI agent Brigid Quinn and her husband Carlo, a former priest and university professor, are trying to enjoy each other in this new stage in their lives. But a memento from Carlo's days as a prison chaplain--a handwritten document hidden away undetected in a box of Carlo's old things--has become a target for a man on the run from his past. Jerry Beaufort has just been released from prison after decades behind bars, and though he'd like to get on with living the rest of his life, he knows that somewhere there is a written record of the time he spent with two killers in 1959. Following the path of this letter will bring Jerry into contact with the last person he'll see as a threat: Brigid Quinn.

I didn't read the first 3 Brigid Quinn books and I didn't feel that you needed to.  There were some questions I had about Brigids relationship with the local sheriff that seems to have been strained by something that happened in a previous book but it didn't take away from the story.

Masterman weaves her own story regarding Perry Smith and Dick Hickok who were convicted of murder and were the main characters in Truman Capote's classic In Cold Blood. Masterman imagines what it may be like if Hickok had made a confession claiming his innocence in writing prior to being put to death and given this confession to the care of a Catholic priest. What if someone else was named in that confession and now that person is out of prison and worried that if the confession comes to light he may be forced back to prison or worse sentenced to death.

Brigid Quinn's husband Carlo was a prison chaplain back when Hickok and Smith were in jail. Jerry Beaufort tracks Carlo down hoping that he can find this written confession and get rid of it before it incriminates him, what he doesn't count on is Quinn. Ex FBI with a moral compass that is just off center, a psychopath niece and excellence at defending herself and others.

This is a fast paced mystery that re imagines Smith & Perry's crimes and pits Quinn against a ruthless killer who will stop at nothing to try to hide his past crimes. I really enjoyed this book despite not having read the others.  In fact I may go back and pick up some of the past books to see how Quinn's character has evolved. If you like kick ass women this may be a good series for you.

Labels: becky masterman brigid quinn we were killers once