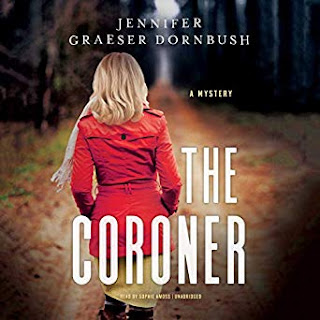 Summoned from her promising surgical career first to her estranged father's bedside and then to his post as medical examiner when his small town needs urgent help with a suspicious death, Emily Hartford discovers home is where the bodies are in this pitch-perfect mystery debut.

Recently engaged and deeply ensconced in her third year of surgical residency in Chicago, Emily Hartford gets a shock when she is called home to Freeport, Michigan, the small town she fled a decade ago after the death of her mother. Her estranged father, the local medical examiner, has had a massive heart attack, and Emily is needed urgently to help with his recovery.

Not sure what to expect, Emily races home, blowing the only stoplight at the center of town and getting pulled over by her former high school love, now sheriff, Nick Larson. At the hospital, she finds her father in near total denial of the seriousness of his condition. He insists that the best thing Emily can do to help him is to take on the autopsy of a senator's teen daughter whose sudden, unexplained death has just rocked the sleepy town.

Reluctantly agreeing to help her father and Nick, Emily gets down to work, only to discover that the girl was murdered. The autopsy reminds her of her many hours in the morgue with her father when she was a young teen - a time which inspired her love of medicine. Before she knows it, she is pulled deeper into the case and closer to her father and to Nick - much to the dismay of her big-city fiance.
When a threat is made to Emily herself, she must race to catch the killer before he strikes again.

Emily has been assisting her father with autopsy's since she was 13. Now she is a surgical resident in Chicago and hasn't been home since her mothers death when she was in high school.  On her birthday she performs an amazing surgery, gets engaged to her rich and accomplished boyfriend and gets called back home when she is informed her father has had a massive heart attack.

Coming back to the small town she grew up in brings up a lot of memories. She finds her high school sweetheart is now the sheriff and still has feelings for her, her father has remarried and is still stubborn. With her father, the county coroner out of commission Emily is tasked with doing the autopsy on a high profile death.

The autopsy brings back memories and Emily soon finds herself sinking into the slower pace of life in Freeport and reconnecting with old friends.  She also finds herself caught up in a murder investigation and feeling pressured by her new fiancé.

This is a great first book in a new series. I am anxious to read more about these characters. I found that the book flowed well and I was instantly drawn into the story. I'm assuming that Emily will take over her dads position while he recovers but I guess only time will tell.