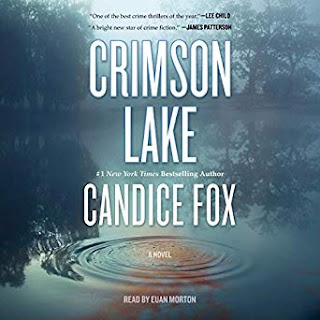 Six minutes in the wrong place at the wrong time—that’s all it took to ruin Sydney detective Ted Conkaffey’s life. Accused but not convicted of a brutal abduction, Ted is now a free man—and public enemy number one. Maintaining his innocence, he flees north to keep a low profile amidst the steamy, croc-infested wetlands of Crimson Lake.

There, Ted’s lawyer introduces him to eccentric private investigator Amanda Pharrell, herself a convicted murderer. Not entirely convinced Amanda is a cold-blooded killer, Ted agrees to help with her investigation, a case full of deception and obsession, while secretly digging into her troubled past. The residents of Crimson Lake are watching the pair's every move . . . and the town offers no place to hide.

I love that the narrator is either Australian or at the very least uses an Aussie accent it gives the novel more atmosphere since the novel is set in Australia.

I love Candice Fox.  I'm a huge fan of her Archer Bennett series and when I found this book I had to grab it.  I really like Ted who is really struggling just to survive as the main suspect of the rape and murder of a young girl.  The fact that he used to be a cop make it even harder on him.  I know some people took exception to Ted getting beat up but Ted while a bigger guy who is an ex cop is often blindsided or knows that fighting back might get him in bigger trouble because although he was never convicted, the stigma of his case hangs over him.  In the media he is guilty so despite not being convicted he still has that weight hanging over his head.

Amanda is a convicted murderer and is a totally quirky character who brings levity to this book.  She almost appears to be on the Autism Spectrum due to her strange outbursts of random inappropriate facts. But honestly it doesn't matter why she is the way she is I just love her character.

Ted and Amanda together make a great team they see things that others miss and despite their differences do a great job.  I think they help each other emotionally as well.  Like they are connected on some weird plane.  Both having been accused of hideous crimes (Amanda convicted, Ted having the charges dropped).

I loved this book and immediately picked up book 2 in this series.