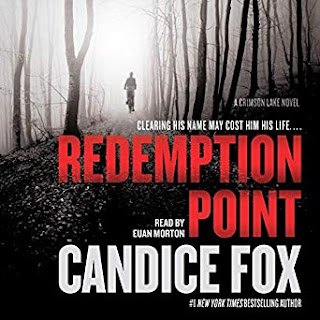 When former police detective Ted Conkaffey was wrongly accused of abducting Claire Bingley, he hoped the Queensland rainforest town of Crimson Lake would be a good place to disappear. But nowhere is safe from Claire's devastated father.

Dale Bingley has a brutal revenge plan all worked out - and if Ted doesn't help find the real abductor, he'll be its first casualty.

Meanwhile, in a dark roadside hovel called the Barking Frog Inn, the bodies of two young bartenders lie on the beer-sodden floor. It's Detective Inspector Pip Sweeney's first homicide investigation - complicated by the arrival of private detective Amanda Pharrell to 'assist' on the case. Amanda's conviction for murder a decade ago has left her with some odd behavioural traits, top-to-toe tatts - and a keen eye for killers . . .

For Ted and Amanda, the hunt for the truth will draw them into a violent dance with evil. Redemption is certainly on the cards - but it may well cost them their lives . . .

I actually picked up a copy of this in Heathrow airport and didn't realize it was the 2nd in a series.  I'm kind of glad I never got to it yet even though its been calling to me from the shelf. I loved this book as much as the 1st one. Ted and Amanda assist in a homicide case with new Inspector Pip Sweeney. Ted is still struggling with his life in limbo caught between the media who has branded him a pedophile and never having been convicted of the crime. Dale Bingley is the father of the girl Ted has been accused of raping last we saw him Ted gave him a file with new evidence showing that Ted was most likely not who hurt his baby girl.  Dale returns set on getting Ted to help him find who really hurt his daughter.

These characters keep getting stronger and the little town that Ted finds himself in is full of interesting characters.  Amanda once again provides some comic relief with her outburst of knowledge and her ability to see things most people don't seem to notice. Dale and Ted have a weird sort of non friendship and Ted also finds himself with one of the most notorious and dangerous drug dealers on his side, protecting him and offering help to find and eliminate the person responsible for destroying Teds life.

Candice Fox hit another one out of the ballpark for me with this sequel.  Gonna have to go buy the 3rd one soon.