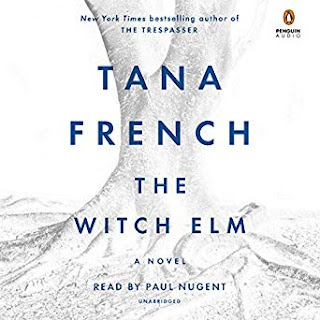 Toby is a happy-go-lucky charmer who's dodged a scrape at work and is celebrating with friends when the night takes a turn that will change his life - he surprises two burglars who beat him and leave him for dead. Struggling to recover from his injuries, beginning to understand that he might never be the same man again, he takes refuge at his family's ancestral home to care for his dying uncle Hugo. Then a skull is found in the trunk of an elm tree in the garden - and as detectives close in, Toby is forced to face the possibility that his past may not be what he has always believed.
A spellbinding standalone from one of the best suspense writers working today, The Witch Elm asks what we become, and what we're capable of, when we no longer know who we are.

This is a dark mystery. Toby has everything, a good job, a lovely girlfriend and a charming personality that allows him to talk himself out of just about anything until the unthinkable happens. He is attacked in his apartment and left struggling to survive, the attack leaves his memory in taters, his speech impaired, leaving him reeling and struggling. He goes to stay with his Uncle who is sick and lives alone. While there a skull is found in a tree in the garden, leading to a murder investigation of a young man who Toby and his cousins went to school with. Toby doesn't remember much about that time in his life, the attack wiped out a lot of his memory and his cousins seem to be hiding something. Torn between letting sleeping dogs lie and finding out the truth Toby goes on a quest to find out if he was the killer because if he is, he isn't sure he can live with himself.

This is a slow paced mystery that keeps peeling back layer upon layer. It is not like French's other books but I still liked it. Toby is a young guy who has had it all but when it gets taken away he is left trying to pick up the pieces of his life and try to discover who he was and who he is now. This isn't just a mystery of who dunnit but a mystery of who you are and if you are the same person after something tragic befalls you. I found this book to be really interesting and the Narrator kept me engaged. Not all of the characters are likable, in fact I would say the vast majority of them aren't likable but there is something so childlike and lost about Toby that I couldn't stop listening.