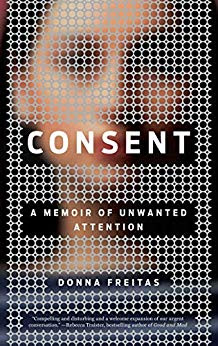 Donna Freitas has lived two lives. In one life, she is a well-published author and respected scholar who has traveled around the country speaking about Title IX, consent, religion, and sex on college campuses. In the other, she is a victim, a woman who suffered and suffers still because she was stalked by her graduate professor for more than two years.

As a doctoral candidate, Freitas loved asking big questions, challenging established theories and sinking her teeth into sacred texts. She felt at home in the library, and safe in the book-lined offices of scholars whom she admired. But during her first year, one particular scholar became obsessed with Freitas' academic enthusiasm. He filled her student mailbox with letters and articles. He lurked on the sidewalk outside her apartment. He called daily and left nagging voicemails. He befriended her mother, and made himself comfortable in her family's home. He wouldn't go away. While his attraction was not overtly sexual, it was undeniably inappropriate, and most importantly--unwanted.

I struggled through this book.  While the story was engrossing I felt that Freitas went off on tangents that just went on and on.  I don't really care how many people she kissed at prom nor does it really do much for a story about a professor's inappropriate behavior. It almost seems like she is trying to build a case for why his behavior is wrong which makes me sad.  Stalking is brutal in the sense that it takes away your sense of security, you find yourself jumpy and always looking over your shoulder.  No matter what she wore, talked about, discussed, even if she had had sex with him, his behavior is wrong because it was unwanted.  Once the relationship moves beyond consent its unwanted and creepy.

This is an interesting story and one I think others should read, her writing style just wasn't for me.

Discover other books or products I like: https://www.amazon.com/shop/readinggrrl
Labels: consent donna Freitas stalking