ARC Review: The Nobody People by Bob Proehl 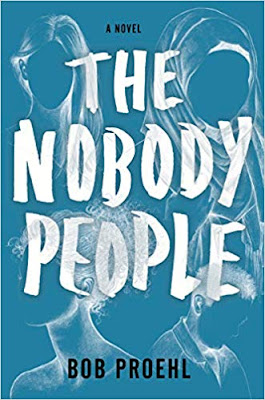 Avi Hirsch has always known his daughter was different. But when others with incredible, otherworldly gifts reveal themselves to the world, Avi realizes that her oddness is something more—that she is something more. With this, he has a terrifying revelation: Emmeline is now entering a society where her unique abilities unfairly mark her as a potential threat. And even though he is her father, Avi cannot keep her safe forever.

Emmeline soon meets others just like her: Carrie Norris, a teenage girl who can turn invisible . . . but just wants to be seen. Fahima Deeb, a woman with an uncanny knack for machinery . . . but it’s her Muslim faith that makes the U.S. government suspicious of her.

They are the nobody people—ordinary individuals with extraordinary gifts who want one only thing: to live as equals in an America that is gripped by fear and hatred. But the government is passing discriminatory laws. Violent mobs are taking to the streets. And one of their own—an angry young man seething with self-loathing—has used his power in an act of mass violence that has put a new target on the community. The nobody people must now stand together and fight for their future, or risk falling apart.

This took me way too long to read and I'm not sure why.  I love the X-men so this type of book is up my alley.  I think there were so many characters that it started to make my head spin a bit and there were things that just didn't suspend my disbelief totally.

Avi Hirsch is addicted to adventure and danger.  He has traveled the world as a reporter until an IUD took his leg. When he discovers the world of Resonants he finds his new calling.  However there comes a point where they turn on him and I'm still not quite sure why. Emmeline his daughter is a resonant, and a powerful one, no one really says what exactly she can do until late in the book and still I'm not quite certain of how it works.  Then there are all the other Resonants that play a significant role in this story and the main antagonist who is a resonant who literally just devours people and things.  He feeds them to what is termed the null but he is following the wishes of someone else - a dark entity in his head.

Of course after the Resonants go public the government goes into a frenzy and there are hate crimes galore and military camps set up, people snatched off the streets, and talk of registration and legal internment camps.

This is the first book in at least a 2 book series.  So it will be interesting to see how this plays out. I really hope that Proehl can tie some of these lingering questions together in the next installment. I almost think that if he had made this series longer and delved a little deeper into each character but making it more books it would have been better.

Discover other books or products I like: https://www.amazon.com/shop/readinggrrl
Labels: Bob Proehl Del Rey Books fantasy mutants Powers The Nobody People