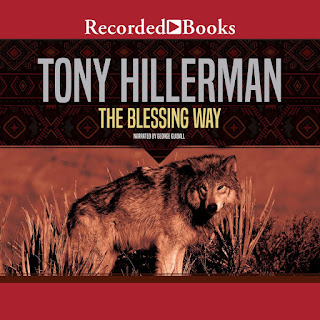 Homicide is always an abomination, but there is something exceptionally disturbing about the victim discovered in a high lonely place, a corpse with a mouth full of sand, abandoned at a crime scene seemingly devoid of tracks or useful clues. Though it goes against his better judgment, Navajo Tribal Police Lieutenant Joe Leaphorn cannot help but suspect the hand of a supernatural killer. There is palpable evil in the air, and Leaphorn's pursuit of a Wolf-Witch is leading him where even the bravest men fear, on a chilling trail that winds perilously between mysticism and murder.

Strangely enough this is my first Tony Hillerman book even though I've seen his name many many times on my perusal of book stores, libraries etc and am always interested everything Native American. This is the first book in Hillerman's series about tribal police lieutenant Joe Leaphorn. Investigating a murder and the harming of animals Leaphorn finds himself trying to find what everyone thinks is a witch inhabiting their land.  I found the plot a bit clumsy and plodding but it still held my attention with the descriptions of landscape and ceremony. By the time I got to the end of the book my attention started coming back.  I am going to try another in this series and see if it gets more cohesive and less clunky. However it was a good introduction to the characters.