Audio Book Review: Brain on Fire (my month of madness) by Susannah Cahalan 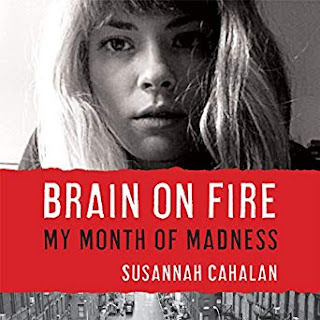 In 2009, Susannah Cahalan woke up in a strange hospital room strapped to a bed, under guard, and unable to move or speak. Her medical records - from a month-long hospital stay of which she had no memory - reported psychosis, violence, and dangerous instability. Yet, only weeks earlier she had been a healthy, ambitious twenty-four-year-old, six months into her first serious relationship and a sparkling career as a cub reporter.

Susannah's astonishing memoir chronicles the swift path of her illness and the lucky, last-minute intervention led by one of the few doctors capable of saving her life. Weeks ticked by and Susannah moved inexplicably from violence to catatonia. Over one million dollars worth of blood tests and brain scans revealed nothing. The exhausted doctors were ready to commit her to the psychiatric ward, until the celebrated neurologist, Dr. Souhel Najjar, joined her team. With the use of a simple - yet ingenious - test, he was able to make a lifesaving diagnosis - revealing a newly discovered autoimmune disorder in which the body attacks the brain.

Terrifying, intriguing and brilliantly written, Brain on Fire is the true story of Susannah Cahalan who developed an autoimmune disorder that attacked her brain causing her to seem to go insane.  As doctor after doctor couldn't figure out what was wrong, misdiagnosing her again and again, Susannah suffered in the hospital.  Her families and friends fought to keep her out of a mental health facility and tried desperately to "save" her. Even once she was diagnosed her road to recovery wasn't an easy one, leaving her with big gaping holes in her memory of this time, not to mention the months it took to regain the motor coordination, and cognitive function she once had.

This book was pieced together through journals, discussions with her parents, her boyfriend, doctors and video that was taken of her while she was in the hospital. Its tragic that this young driven writer was reduced to one word sentences, psychotic outbursts, and seizures with no one being able to figure out what was wrong. Even today it seems not all doctors know about this disease although more and more people have been diagnosed with it.  This book is a cautionary tale to always get a 2nd and sometimes a third and fourth opinion.  Scary yet deeply moving this book held my attention up until the very end.