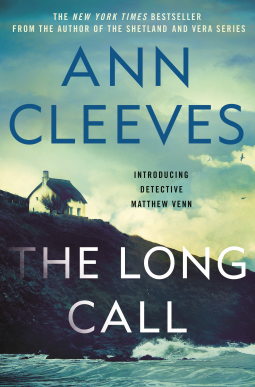 In North Devon, where two rivers converge and run into the sea, Detective Matthew Venn stands outside the church as his estranged father’s funeral takes place. On the day Matthew left the strict evangelical community he grew up in, he lost his family too.

Now, as he turns and walks away again, he receives a call from one of his team. A body has been found on the beach nearby: a man with a tattoo of an albatross on his neck, stabbed to death.

The case calls Matthew back to the people and places of his past, as deadly secrets hidden at their hearts are revealed, and his new life is forced into a collision course with the world he thought he’d left behind.

This is a brand new series and if this is how it starts I'm sure to pick up the next one.  Matthew Venn is a police detective in a small community.  He is estranged from his Brethren parents and is married to Jonathan who runs the local community center Woodyard. When a man is found murdered on the beach near his home it is up to Matthew to solve the crime, however the deeper they investigate the more ties lead back to Woodyard. When mentally challenged women start to go missing the case gets even stranger with stronger ties to the community center and Matthew struggles whether he should recuse himself or not.

There is a lot going on in this book, and a lot of characters.  All of them mingle together to create a well written, well developed crime story.  Matthews past, with his parents and the Brethren along with Matthews struggles to fit in with his team take center stage but his colleagues, Ross, the cop who is too eager to please and rarely gets to the point fast enough, and  Jen the single mom who is struggling to juggle her job, her kids and her life also take a prominent role in the story.  There are many threads to this story and the answers are not obvious which I loved.  I figured out small pieces but felt that I didn't quite put it all together until the characters did which is a refreshing change.

I also really enjoyed that Matthew's lgbt status didn't take center stage.  It was mentioned since it went against his parents faith but it wasn't a main focus.  Incorporating lgbt characters into mainstream books is crucial to being seen as "normal".