Audio Book The Conception of Terror by M.R James 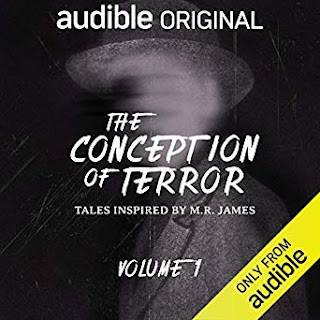 Casting the Runes - adapted by Stephen Gallagher
When academic Jo Harrington (Anna Maxwell Martin) is sent a paper - The Truth of Alchemy, by Anton Karswell - for peer review, she pulls no punches. It has no place in a serious academic publication, and Karswell is a half-bright fool. However, when the editor writes a rejection note to Karswell, he inadvertently includes her entire email. Occultist Karswell (Reece Shearsmith) doesn't take kindly to criticism.

On the tube home with her partner Edward Dunning (Tom Burke), Jo spots a poster with her name on it. It reads: 'In memory of Joanne Harrington, M.Litt, PhD, died September eighteenth, three days were allowed.' Is there anything that Edward can do to save Jo from this curse?

Lost Hearts - adapted by A. K. Benedict
Teenager Stephanie Elliot (Rosa Coduri) is taken to Aswarby House to be fostered by Mrs Bunch (Susan Jameson). Stephanie strikes up a friendship with Ben (Bill Milner), the adopted son of charismatic community leader Mr Abney (Jeff Rawle). He tells her that Mr Abney is a good man: he even took in a child refugee last year, but she ran away and stole from him. Stephanie is troubled by voices and visions of a dead girl clutching at her chest, and when Ben disappears she begins to suspect that all is not right in Aswarby House.

The Treasure of Abbot-Thomas - adapted by Jonathan Barnes
When former Somerton school pupil Greg Parsbury (Robert Bathurst) meets history teacher Mika Chantry (Pearl Mackie) at a memorial service for schoolmaster Sam Abbot-Thomas, he begs for her help. He has been sent a postcard by the estate of the mysterious and charismatic Abbot-Thomas. On it is a strange inscription in Latin, which he believes to be an inaugural clue in a treasure hunt: much like the elaborate treasure hunts Abbot-Thomas used to set back in the 1970s. There were rumours that Abbot-Thomas possessed a hidden fortune, and Parsbury and Chantry set out to find it.

A View from a Hill - adapted by Mark Morris
Comedian and podcaster Paul Fanshawe (Andy Nyman) and his wife, Sarah (Alice Lowe), visit the Cotswolds on holiday, trying to rebuild their lives after the death of their young son, Archie. Whilst out walking they spot a beautiful abbey across the valley on Gallows Hill, but when they reach it, they find the building is little more than rubble. While Sarah explores, Paul records commentary for his podcast. Sarah thinks she hears children's laughter, but there's no-one there. Later that night she listens back to the recording and hears a child's voice whisper, 'Mummy.' Sarah is convinced that Archie is trying to reach them and wants to return to the ruins. But something far worse is waiting for them on Gallows Hill.

This is more than just an audio book this is more like a series of audio plays.  This isn't just a straight reading but characters and background noise etc.  These are all spooky stories and would be great to listen to around a fire outside on a fall evening.  This is Volume 1, I haven't seen any other volumes but out of the stories in this book I would say I really liked most of them they had a good scare factor and the actors who read them were magnificent I was completely swept up in the stories.

For those of you who listen to audio books I had a bit of a learning curve when I first started this due to the more play like attributes of the narration.  The outside noise, the scene cuts, no chapter 1, chapter 2 etc...but it didn't take me long to become completely engrossed.