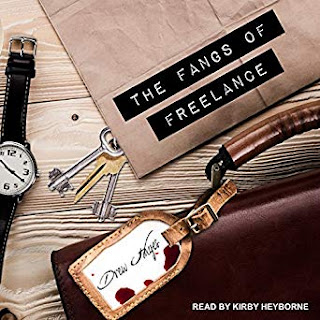 When Fred formed his own parahuman clan out of necessity, he understood that it was going to come with new responsibilities. Much as he hoped those tasks would center around extra paperwork and perhaps the occasional mandatory class, enough time around the supernatural has taught him to be ready for anything. Or so he thought.

As a freelance accountant for the Agency, Fred soon finds himself being tossed into new, unexpected, and perilous situations. From inventorying ghostly castles, to exploring unsettling amusement parks, to negotiating with dangerous mages, it seems there is no end to the uses for an accountant of Fred's specialty. But dangerous as the new jobs are, the greatest threat may come from the past. An old enemy is making waves once more, an enemy who would go to great lengths to destroy Fred and everyone he loves. And this time, they've brought backup.

Fred is moving up in the parahuman world. He not only has his own accounting firm, he now has his own vampire clan, Clan Fred. He also is the freelance accountant for the Agency, the super secret organization that polices the parahuman world and doesn't have a very good reputation with other parahumans.  But Fred being Fred he isn't worried about the biases of others he forms his own opinions which is how he wound up dating an agent.

Now that Fred's life isn't as quiet as it once was, and danger is becoming almost normal, he once again finds himself skirting angry ghosts, human meth cookers and parahuman bad guys from his past.  There is never a dull moment for this sweater vest wearing accountant.

Once again I have a love affair with Fred and his new clan of parahumans.  Even some of the agents that I wasn't sure I liked have become likeable characters in their own way.  Excellent series, which I can't recommend enough.  And since I have been listen to these as audio books I also can't say enough about Kirby Heyborne, his narration is spectacular, the different voices for the characters is spot on and I find myself lost in the story.