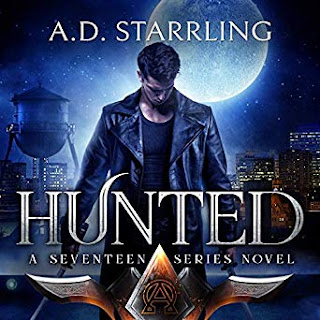 They call me the half-breed. The first time they killed me, I was ten. They’ve been hunting me all my life. It’s time I stopped running.

Born of a Bastian mother and a Crovir father, a half-breed who is abhorred by the two Immortal races, Lucas Soul spends the first three hundred and fifty years of his existence being chased and killed by the Hunters.

One fall night in Boston, the Hunt starts again, resulting in Soul's fifteenth death and triggering a chain of events that sends him on the run with Reid Hasley, a former US Marine and his human business partner. From Paris to Prague, their search for answers leads them deep into the Immortal societies and brings them face to face with someone from Soul’s past. Shocking secrets are revealed and fresh allies come to the fore as they uncover a new and terrifying threat to both immortals and humans.

To defeat his enemies, Soul must embrace his tortured fate and become the Hunter. But time is running out. Can he protect the ones he loves and prevent another Immortal War before his seventeenth and final death?

This series is free with kindle unlimited. I was actually pleasantly surprised by this book.  I didn't know what to expect.  Right from the start there is action and it continues through the book.  Soul is being hunted and he isn't sure why, but with his faithful friend and business partner he is determined to find out.  What he finds along the way is a brewing civil war, a fractured family, plots of biowarfare and secrets beyond anyones understanding.

I really enjoyed this book and look forward to the next in the series. I wasn't sure I understood the different factions at first of immortals but then I caught on.  I like the mythology behind immortals only living until their 17th death as well.  This book has been compared to the Dresden books by Jim Butcher and a bit of highlander but I think there is more to it.  While the Dresden books are a little more polished this series is off to a good start.

The narration is well done and I will look for others narrated by Bower.