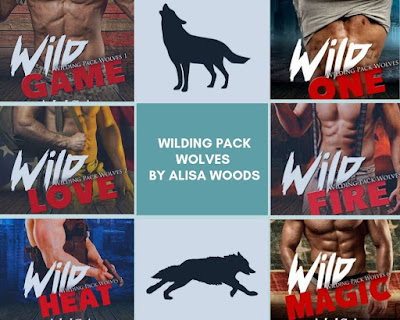 Wild Game: Owen’s an ex-Army bodyguard for a beautiful gaming heiress… and a man with a secret. Ex-Army Texas boy Owen Harding fears only one thing—his inner beast. A year in Agent Smith’s experimental cages has changed his wolf into something monstrous. But a hate group is hunting the Wilding pack, so Owen’s serving again, this time as bodyguard. If only the girl he’s protecting wasn’t so damn sexy… and completely off limits.

Nova Wilding’s father was assassinated, leaving her a gaming company to run, a new game to release, and a pack full of wolves who want her for a mate… including a beta who’s determined to have Nova and her company. When a bomb goes off in her car, Nova finds herself in her sexy bodyguard’s arms… but he’s absolutely the wrong man at the wrong time.

Wild Love: The Army is in Noah’s past… and he hopes his dark secret stays buried there. Noah Wilding’s family is being targeted by an anti-shifter hate group—so he took medical leave from the Army to return home and help out. At least, that’s the story he’s told everyone… meanwhile, he’s going undercover to lure out the haters trying to kill the Wilding pack.

Emily Jones is the lead programmer for WildLove, the new app that hooks up shifters and humans for a night of hot sex and no commitments. Only she hasn’t had a date herself in years… ever since that dark day when her family didn’t protect her when she needed them most. She figures one magical night with a hot wolf will help her finally move on with her life.

When Noah swipes right for Emily, she thinks her dream one-night-stand is about to come true. But with a hate group planting car bombs during WildLove hookups, Noah and Emily are on the front lines of love. They have to hunt down a killer before he strikes again… and before they do more than heat up the sheets. Because humans and shifters might get “Wild for a Night”… but they’re not supposed to fall in love.

Wild Heat: The police department is no place for shifters… something Kaden knows all too well. Kaden Grant’s protective instinct serves him well in the Seattle Police Department… as long as no one knows about his past. But when the mayor’s favorite artist is targeted by the local hate-fanatic, he orders protective custody. Kaden’s desperate to land the assignment because any other cop would get the girl killed. If only her wild streak didn’t threaten to bring out his long-buried secret…

Terra Wilding’s family is being torn apart, and now the Wolf Hunter is targeting her—all because her photographs bring out the light in the dark corners of Seattle. The only way to keep her baby sister Cassie and the other wolves safe is to leave her mountain refuge and hole up in a small house that feels more like a cage. If only the human cop who’s guarding her wasn’t so hot…

When Terra slips away to meet up with a secretive art collector, Kaden’s protective side goes into overdrive. He’s an alpha’s alpha, and he lights a wild heat that threatens to burn them both down. Kaden wants to protect and serve, but can he tame the wildest Wilding before the Wolf Hunter catches them both?

Wild One: Marco’s pack is being hunted… but he needs a mate to keep them strong. Marco Wilding’s pack is being picked off, one by one. The Wolf Hunter’s mercenaries are snatching wolves off the street then dumping the tortured bodies inside Marco’s territory. When they go for a shifter kid, Marco’s patrol is on it—until a beautiful female wolf steps in and kicks the kidnapper’s ass. The delay saves the kid, but Marco can’t stop drooling over this brave, unmated female who mysteriously landed in his lap.

Only she wants nothing to do with him.

Julia Holloway’s life was finally turning around—she was getting her degree and getting out of her mother’s house with its parade of abusive step-fathers. Then her wolf went wild and ruined her life. Now she’s on the run, but her wolf is still out of control. When it once again tries to save someone, this time a kid who was being kidnapped, she gets an offer she can’t refuse—safe harbor inside a shifter pack while she gets her life together.

Only the hot shifter leader with the passionate eyes wants a mate… and wants her to stay.

As Julia and Marco race to stop the Wolf Hunter’s men, Julia will have to do more than just tame her wild wolf… she’ll have to decide whether giving up everything she wants will bring her the one thing she really needs.

Wild Fire: Troy fights fires for a living… but the hot fire of a cool scientist is nothing short of magic. Troy Hartman is a firefighter and EMT who fought his way out of the shifter gangs as a kid. He’s been watching the Wilding family in the news as they battle the Wolf Hunter, and he’s been itching to join the cause. When the Wilding research facility gets firebombed, he’s first on the scene… and first to rescue a beautiful blue-eyed white wolf.

Only this is no ordinary shifter.

Zoe Wilding is a genetic researcher with a secret she’d rather not have, but with Agent Smith’s immorally-acquired experimental data on shifters, that may change. If she can just isolate the gene that expresses her dangerous white wolf, she’ll finally have a normal life. One that might include a man, if not a mate.

Then her lab blows up.

All five of the Wilding families have now been targeted by the Wolf Hunter, and the entire cadre of white wolves—Grace, Noah, Kaden, Owen, and now Zoe—have joined together to find him. Troy’s all-in with Daniel Wilding for the hunt, but the closer Troy gets to Zoe, the more his wolf wants her… only she’s hell-bent on destroying the magic inside her. Can he win over this gorgeous girl and get her to accept the beauty of her inner wolf… or will finding the Wolf Hunter destroy the wild fire inside the woman he’s starting to love?


Wild Magic: Daniel’s on leave from the Army to train an elite team of wolves… and a witch with a wild secret is not part of the plan. Daniel Wilding’s family is being meticulously stalked by the Wolf Hunter. He takes a leave from the Army to fight back by assembling a team of white wolves—shifters who can tap into an ancient witchy magic. The only problem? The sexy witch brought in for the training is stirring up the wild magic inside him—magic he’d rather keep buried. But when he finds the hot little witch has a secret of her own, his wolf won’t rest until he uncovers it… only what he finds might let loose the wildest magic of all.

These are relatively short books, I listened to them and they are about 5 hours each, Interesting story arc that goes through all of these and started in the River Wolf Pack books.  What's different in these is that the Wilding Pack harbors a secret past.  The legend of the white wolf that broke the pack when the white wolf broke the mating bond with his brother and his mate and sired pups with her and then killed his brother.  However that may not be what actually happened.  Now the wilding pack seems to have more and more white wolves who are said to be part wolf part witch. Some were genetically modified and some were born that way, either way if they can tap into that witchy power they may have a change of defeating the wolf hunter who is butchering wolves. Good story that keeps you engaged, hot steamy sex scenes and strong female characters.