AUDIO BOOK REVIEW: The Surrender Experiment: My Journey into Life's Perfection by Michael A. Singer 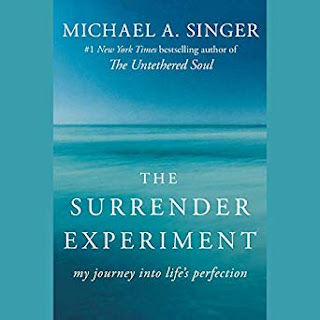 A thriving spiritual community on over 600 acres of pristine forest and meadows in Florida, a cutting-edge software package that transformed the medical-practice management industry, a billion-dollar public company whose achievements are archived in the Smithsonian Institution, a book that became a New York Times best seller and an Oprah favorite, and a massive raid by the FBI that would lead to unfounded accusations by the US government - how could all of this spring from a man who had decided to live alone in the middle of the woods, let go of himself, and embrace a life of solitude? But this man had made a radical decision - one that would unwittingly lead him to both the pinnacle of success and the brink of disaster.

What a fascinating story and what a perfect reminder to let go as often as possible.  That there is a force out there greater than us that has our best interest at heart.  I was totally gripped by this book and finished it in no time.  Read by the author his experiment was fascinating and his life inspiring.  How a hippie who only wanted to live alone in the woods and meditate came to run one of the most successful medical billing software companies. It wasn't even his success that made this book interesting but rather the grace with which he went through life.  How he never gave up his values of meditation and self improvement and instead surrendered to the clues that life was giving him in his life.  Each time his life took a new turn he struggled a little and then remembered to just embrace the change and if it was meant to be it would be.  Very inspirational and a tribute to those who listen to their intuition and inner voices.  I'm so happy to have read this book and it came to me at the perfect time when I was really struggling with something in my life. Unknowingly I found myself letting go and the change was amazing. Instead of being filled with anxiety I found myself at peace and just accepting that the situation would resolve itself the way it was meant to even if it wasn't the outcome I wanted or hoped for.