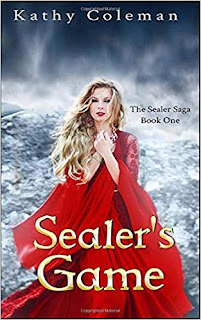 Hell hath no fury like a goddess scorned…
As Champion, Carita of Bel Auryn thought she would spend her days fighting demons. Instead, she is drawn into the latest scheme of the Moon Goddess, Ruby: a contest to choose a man who will have the “honor” of fathering her child. When Ruby encourages Carita to choose a man for herself, she picks the man she is most drawn to–and immediately regrets it.

Lucian Veradayne is the Lord of Death. He knows he must win Ruby’s game at any cost. It doesn’t matter that he has avoided her for two thousand years. Nor that she tried to kill their first child. And it really doesn’t matter that he would much rather woo Carita. The Soul Well has given Lucian a prophecy: he and Ruby must have another child. A child who will save the world.

Dealing with their mutual attraction will be the least of Lucian and Carita’s problems. They are not the only ones who have been drawn into Ruby’s game. Someone else wants to win. Someone who wants Ruby dead. Will Carita and Lucian be able to protect her long enough for a victor to be named? And if they succeed, will they be able to walk away from each other to ensure the prophecy is fulfilled?

I haven't read a fantasy romance in a while and I really liked this book. Ruby is a Sealer, Moon Godess who lives in another realm, Lucian is also a Sealer, the Lord of Death and resides in the earth realm.  However Lucian and Ruby had once been betrothed but then Ruby tries to kill their son.  Now there is a prophecy that says if Lucian and Ruby don't have another child the world that Ruby rules may be doomed.  However Ruby will never consent to having another child with Lucian and the last person Lucian wants to impregnate is Ruby after what happened to their first child.

Ruby decides to hold a contest to see who will have the honor of fathering her next child. Lucian following the prophecy knows he must win this contest but it is difficult when he finds himself falling for Carita, Ruby's champion and guard.

This book is not for the faint of heart, there are several graphic depictions of murder and dismemberment but it is a great story. The prologue was by far the most distressing as it focused on Ruby and her first born with Lucian.  I was immediately sucked in by the story which kept me turning pages and holding my breath.  Ruby is a grade A bitch, I would compare her to Joffrey from Game of Thrones and Lucian is an interesting man and I can't wait to read more about him.  Ruby and Lucian's first born is also a very interesting character and I would like to see how this prophecy affects him because Lucian never stuck around long enough to find out from the prophet!  I really enjoyed this book and will keep an eye out for book 2!

Disclaimer: I received an advanced copy of this book from the publisher through Xpresso Book Tours in exchange for an honest review.