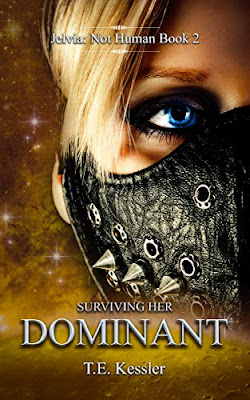 Two men: One human. One not. She has one choice. She hopes it’s the right one. Two men. Both dominant, both dangerous, both unsuitable. Both want her.

It took Courtney five years to leave Greg Martin, and now he’s back, full of apologies and puppy-dog eyes.

And both want to protect her from the other.

The title and the cover of this book threw me off and I think really do a disservice to this book.  This is a solid fantasy sci fi romance.  Courtney had been in a bdsm relationship with her old boyfriend Greg that turned controlling and abusive than sexy and kinky in the bedroom. After she left him she moved in with her best friend Macy (book 1 was about Macy and her Jelvian boyfriend Narcifer). Now Courtney has moved back home with her mom and has a new job when she runs into the Jelvian who kidnapped her in book 1 but who she has a strong attraction to and her ex boyfriend who says he has changed.  Aldarn is very attracted to Courtney despite not liking humans but has been having some memory problems and episodes recently that have put his job and his life at risk.  Greg says he is a changed man and just wants to protect Courtney from the obsessed Jelvian. But has he changed or is it all a game? Macy and Narcifer from book 1 make appearances in this book and overall its a good mystery romance with a sci/fi fantasy twist.  The cover really makes it seems like some twisted dungeon game of whips and ropes and there is none of that in this book.  I actually think the cover is off-putting and doesn't really do the story justice.

Discover other books or products I like: https://www.amazon.com/shop/readinggrrl
Labels: jelvia te Kessler