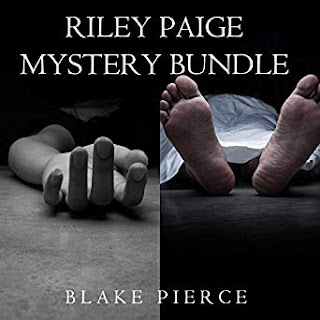 A bundle of books #1 (ONCE GONE) and #2 (ONCE TAKEN) in Blake Pierce's Riley Paige Mystery series.

In ONCE GONE, women are turning up dead in the rural outskirts of Virginia, killed in grotesque ways, and when the FBI is called in, they are stumped. A serial killer is out there, his frequency increasing, and they know there is only one agent good enough to crack this case: Special Agent Riley Paige. Riley is on paid leave herself, recovering from her encounter with her last serial killer, and, fragile as she is, the FBI is reluctant to tap her brilliant mind. Yet Riley, needing to battle her own demons, comes on board, and her hunt leads her through the disturbing subculture of doll collectors, into the homes of broken families, and into the darkest canals of the killer's mind. As Riley peels back the layers, she realizes she is up against a killer more twisted than she could have imagined.

In ONCE TAKEN, women are being murdered in upstate New York, their bodies found mysteriously hanging in chains. With the FBI called in, given the bizarre nature of the murders-and the lack of any clues-there is only one agent they can turn to: Special Agent Riley Paige. Riley, reeling from her last case, is reluctant to take on a new one, since she is still convinced a former serial killer is out there, stalking her. She knows, though, that her ability to enter a serial killer's mind and her obsessive nature is what will be needed to crack this case, and she just can't refuse-even if it will push her over the edge.

The description of this series intrigued me and I wasn't mistaken. These books are dark, intense and interesting.  Riley Page is an FBI agent who had been abducted and held by a serial killer prior to the series starting.  She has PTSD and is on leave until being called into consult on a case.  Riley isn't sure that her abductor is actually dead so flash backs and strange things happening always lead her to conclude that it is him back and ready for revenge.

In Once Gone Riley is helping to hunt down a serial killer who poses his victims like dolls, she has a hard time convincing the powers that be that she is on the right track but her partner has her back.  Riley has always had an uncanny knack for getting inside a killers head.

In Once Taken Riley is hunting a serial killer who kills with chains.  She also meets an interesting character who is in prison for murder but has become an expert on murderers.  She turns to him for help at the recommendation of a colleague, but what she finds may require more than she is willing to give. Its a quid pro quo situation and Riley thinks that he sees her maybe a little too well.

Both books are well written and interesting and I liked the narrator however the narrator is British and these books take place in the US which I often forget while listening.  I have to keep reminding myself this is the FBI, its US not England, that would be my biggest fault with this recording.  Although I do really like the narration and the ways she portrays the different characters.