BOOK BLITZ: The Dichotomy of Angels by NR Walker 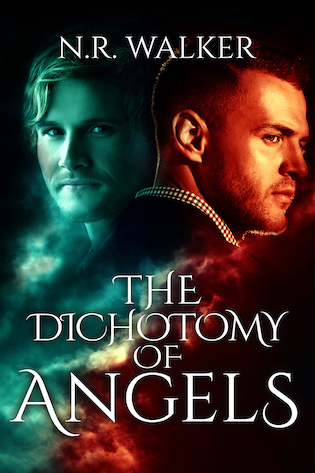 
Nathaniel and Chasan are no ordinary angels.
Destiny chose them to be twin flames, fated mates. But Nathaniel has avoided Chasan for nearly a thousand years.
When sent to Earth on a mission to live and work together, Nathaniel comes face-to-face with his destiny. Short-tempered, petulant, and grumpy, he hates the idea of being fated to anyone and has chosen an existence of isolation rather than spending time with the calm, kind, and serene Chasan.
But now he has no choice.
One is fire, the other is air; a true dichotomy of angels. Together they will be ignited, or they will be extinguished. This assignment will seal their fate either way.
* * *
85,000 words. A sometimes-funny, sometimes-serious story about love, destiny, and other heavenly disasters.

Goodreads / Amazon
—
EXCERPT:
The transfer to a human form was never easy. It felt confined and constricting, like an ill-fitting suit, and Nathaniel always hated the residual squeeze the morphing left in its wake. He shook himself out, rolling his shoulders and fisting his hands a few times until the discomforting buzz subsided.
The room Nathaniel found himself in was typical living quarters for twenty-first century humans. There was a sofa, a dining table, a kitchen, a fluffy white rug, all spacious and grand, and any human would have appreciated the apparent wealth and luxuriousness of it all. But not Nathaniel.
Human niceties weren’t something he much cared for.
He did, however, notice the skyline out the window. He’d seen it in reports and videos enough to recognize it, and it was apparent the apartment was high up and well-positioned because of the view.
“New York,” he grumbled.
Chasan walked to the window, inspecting the nearby buildings and the park across the road, then turned and smiled. “This city never gets old.”
Nathaniel suppressed the urge to roll his eyes. Chasan found beauty in everything. He had for thousands of years, and it had always been a burr in Nathaniel’s boot. Chasan would simply smile and nothing was ever an issue. He took everything in his stride, and everything was cheery and promising. His blessed cup forever runneth over.
Nathaniel was more of a chalice-half-empty kind of angel.
Chasan and he had worked together several times over the eons, not particularly well, Nathaniel could admit. They were too different. Like night and day: Chasan was sunshine and roses; Nathaniel was darkness and thorns. If you thought angels couldn’t have such vast and varied personalities, you’d be mistaken. They most certainly did. And with differing personalities came personality clashes.
And that’s what this was. Between Nathaniel and Chasan. Just a clash of personalities. The tension, the push and pull, that instant irritation Nathaniel felt from being anywhere remotely near Chasan could all be explained by a difference of personalities.
At least that’s what Nathaniel had convinced himself of since their last disastrous encounter. An encounter that might or might not have led Saint Peter to down most of the sacramental wine—actually, half of the heavens had taken a hit that day—so why Saint Peter had insisted they work together again now was as bold as it was stupid.
“Nathaniel?” Archangel Michael said, as though not for the first time.
Nathaniel blinked and focused. “Yes. Apologies.”
“How does the human modification feel?” Michael asked. “There can be a period of adjustment. It’s been a while for you, has it not? Since you’ve taken human form?”
Nathaniel rolled his shoulders again, noting the absence of his wings and the tightness of his skin, and shook off the unease. “It’ll pass, I’m sure.” Michael’s gaze darted to Chasan, then back to Nathaniel, and a smile played at the archangel’s lips. Nathaniel had always liked Michael—well, he hadn’t disliked him, so that was always a start—but Nathaniel knew this mission was going to be a rough one. Saint Peter had been behaving oddly and wouldn’t divulge any information, and that never boded well. And given he’d been partnered with Chasan . . . “Michael, what is the emergency mission we have been sent here for?”
Michael smiled at them both, then gestured toward the sofa. “Please take a seat.”
Chasan sat, because of course Chasan sat. Chasan did everything he was told. Nathaniel did not. This mission wasn’t going to be good. Not good at all. “I’d rather stand.”
Michael gave Chasan a patient smile and ignored Nathaniel’s petulance. With a small flick of his wrist, in a flourish of sparkles, two files appeared in his hand. “Your missions,” he began, handing Chasan his file first. He held out Nathaniel’s file, but Nathaniel refused to take it. Michael pursed his lips and sighed, his annoyance clear. “This mission isn’t optional, Nathaniel. So quit the dramatics. We’re not here to pander to you.”
“Oh dear,” Chasan murmured, and when Nathaniel shot him a look, he saw that Chasan was reading his file.
“Oh dear, what?” Nathaniel demanded. He held his hand out to Michael for his file now, but this time it was Michael who ignored him. Instead, Michael opened the file and read out loud. Probably because if Nathaniel wanted to act like a child, Michael would treat him like one.
“Nathaniel Angelo.” Michael paused. “That’s your human name, by the way.”
“Angelo?” Nathaniel scoffed. “It means angel. Was the Creative Department off work that day?”
“Don’t complain,” Chasan said. “My surname’s Bellomo. That’s Italian for beautiful man.”
Nathaniel rolled his eyes out loud that time. “Because of course it is.”
Michael ignored both of them. “Nathaniel, age thirty-one. Youngest of three children to Christian and Mary Angelo of Bethlehem, New York.”
Nathaniel blinked. “Christian and Mary of Bethlehem? Why did they stop short of calling my father Joseph? Is this someone’s idea of a joke?”
Michael just kept on reading. “The Angelos are a wealthy family, which explains this apartment.” He gestured to the room they were in. “So your parents weren’t overly impressed when you decided that being an early childhood development teacher was your true calling—”
“Wait, wait. What?” Nathaniel asked.
Michael looked up from the file, his expression serious. “A teacher. Preschool to be more specific.”

Author Bio:
N.R. Walker is an Australian author, who loves her genre of gay romance. She loves writing and spends far too much time doing it, but wouldn’t have it any other way.
She is many things: a mother, a wife, a sister, a writer. She has pretty, pretty boys who live in her head, who don’t let her sleep at night unless she gives them life with words.
She likes it when they do dirty, dirty things… but likes it even more when they fall in love.
She used to think having people in her head talking to her was weird, until one day she happened across other writers who told her it was normal.
She’s been writing ever since…