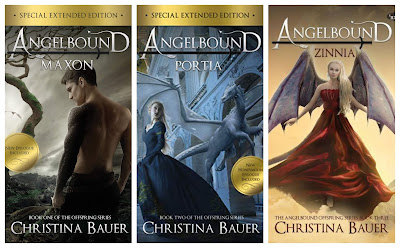 Maxon
Prince Maxon may be twenty-two years old now, but he’s still haunted by his boyhood abduction and torture in Hell. To deal with his past, Maxon limits his present-day activities to killing demons and seducing women. No long-term relationships. No combat too dangerous. No problem, right?

Maxon’s life has stalled out. The old thrills aren't there anymore, either on the battlefield or in the bedroom. While staking out his next fight, Maxon meets what seems like just another girl after a good time. What he gets is a close encounter with Lianna, a lady warrior with ties to the mysterious elemental rulers called the monarkki.

Trouble is, Lianna’s running from a dark history of her own, and her elemental enemies are closing in. When Lianna gets taken, Maxon realizes that after years of wrong choices and dead ends, the right woman is worth risking it all...

Portia
Unlike her famous older brother Maxon, Princess Portia isn't known for killing demons or attracting admirers. The reason why is simple: a spell was cast on Portia, and the magic has marked her to one day transform into a dreaded Void demon.

To fight this horrible fate, Portia’s spent her life hiding in libraries and learning magic. But when the Void demons threaten to destroy all the after-realms—and the handsome dragon Emperor Tempest offers his help—then Portia suspects that her future holds more than just a demonic metamorphosis.

Fate is calling the bookworm princess onto the battlefield.

This time, it’s a fight against both deadly enemies and her heart’s desires.

Zinnia
As the last dragon shifter, I live alone, hiding in one of Earth’s sacred deserts. My human handlers tell me that I have no parents, no name, and no purpose other than to train for battle and one day become a vessel for the reincarnation of Chimera, the greatest dragon shifter of all. Sadly, Chimera’s rebirth will mean my own death. But my handlers say this sacrifice is a noble fate that will rebuild the dragon shifter world.

I shall die on my seventeenth birthday. That’s five days from now.
Then I hear music thumping across the desert. I take my mortal form, follow the sound, and find humans dancing in what they call a rave. There is a stage and a rock band. One thing quickly becomes clear: Unlike the audience, the musicians are dragon shifters, just like me. And one of them, the guitar player Rhodes, makes my knees turn watery. The lead singer, Kaps, has something strangely familiar about her.

It all adds up to one conclusion: My handlers lied to me. I’m not the last of my kind. Memories reappear. I had parents once. Portia and Tempest. I even had a name. Zinnia. Perhaps I have a reason to live as well. I step past the dancing humans to confront the players.

I will find out the full truth, no matter what.

Maxon is a prince with a problem.  Life is boring to him.  It is taking more and more to get him excited about anything anymore, including women, until he sets his eyes on Lianna. Lianna is an elemental with other elementals after her to steal her powers, but to steal her powers means stealing her life.  Maxon is determined to help Lianna.

Portia is Maxon's little sister, conceived right around the time of his marriage to Lianna. Portia has been marked as a void demon and few want to be around her.  An accidental run in with Maxon's friend Tempest who disappeared right around the time of Portia's birth sends chills down Portia's spine.  The good kind of chills. When the world literally starts falling apart around Portia and Tempest they embark on a quest to save the world and we discover why Tempest has been so absent all these years.

Zinnia is Portia and Tempests daughter who is kidnapped, her memory erased and trained to become a vessel for Tempests psychotic father Chimera who was killed in the book Maxon.  Zinnia spends her time in the human world in a cave until music in the desert seems to call to her. Rhodes was always destined to be with Zinnia, their connection through music and magic drew them together, now Rhodes finds himself drawn to a stranger who reminds him of his lost love Zinnia, until he discovers this stranger is Zinnia and the danger to her is very real.

I loved all 3 of these books and look forward to Rhodes coming out December 17, 2019. Apparently there is a lot more of these Angelbound books that I will need to look into but this is a newer series based on the offspring. Great fantasy romances.

Disclaimer: I received an advanced copy of this book from the publisher through Xpresso Tours in exchange for an honest review.