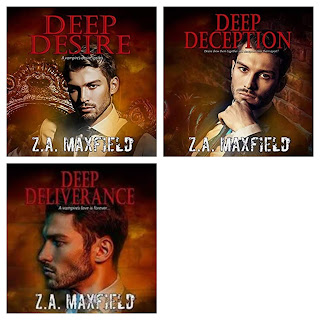 Deep Desire: There's no leverage like seduction...until love takes a big bite out of Adin's plans.

As the Indiana Jones of historical erotica, there is no document Adin Tredeger can't unearth. Why he would risk the biggest coup of his career to join the mile-high club is beyond him. Nevertheless, the disarming, dark-eyed vampire Donte somehow enters Adin's locked airplane washroom and has him completely nude and coming apart, all without a whimper of protest.

Chemistry draws them together even as fortune tugs them apart. When a third party enters the chase, will Adin and Donte join forces to fight an enemy with a deadly goal—to erase Donte from history forever?

Deep Deception: Adin will give up everything for his immortal lover...except his humanity.

Adin and Donte have reached a critical point in their relationship. Donte wants forever. Adin isn’t ready. A case of mistaken identity gives Adin the chance to acquire an artifact his old foe Ned Harwiche covets. He jumps at the opportunity, if only as payback for all the dirty tricks Harwiche has pulled over the years. Unfortunately, the prize this time turns out to be an adolescent boy named Bran.

Sickened, Adin vows to help the boy, but like Donte—like a lot of the world Adin never knew existed—Bran isn’t what he seems to be.

While Donte and Adin negotiate the meaning of the word forever, Bran is running out of time. Especially when tragedy and betrayal pit Adin's long-cherished beliefs against Donte's love.

Is their love strong enough to overcome their differences and protect the innocent Bran?

Deep Deliverance: Forever is a long time. Even for a vampire.

Adin never wanted to be a vampire. He still hasn’t forgiven Donte for turning him. Ned Harwiche's funeral is the perfect opportunity for putting some distance between them, but as a newly turned vampire, Adin mustn't go alone.

Cristobel Santos—one of Donte's lifelong enemies—and an attractive Irish vampire named Sean offer to chaperone his trip. They are as determined to help Adin as he is to reject their aid.

While Adin denies his new reality he's kidnapped by rogue hunters and used as a lab rat in some skin-searing experiments. Adin's distress electrifies his connection to Donte, but rescue is only the beginning....

Can Donte convince Adin they belong together for eternity?

Adin is a collector of historical erotica when he comes across a manuscript that is beautiful, but others are after it as well.  What he discovers is another world, a world of vampires, shifters, imps and more.  Donte wants the manuscript- its not just a book to him, its his personal journal about the love of his life.  The other man hunting it is his lovers son who wants to destroy it.  Adin is caught in the middle.

At first I thought this was just a vampire/human love story but it turns out to be so much more.  More in that you see Adin grow in the trilogy, realizing his entitlement and his flaws and how his headstrong ways are just putting people in danger. Its a vampire coming of age story.  I really enjoyed this series, with its twists turns and manipulations, I liked the other characters that flit in and out of Adin and Donte's lives and found myself wanting to smack Adin myself sometimes.