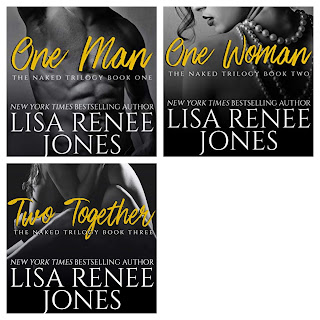 One Man
One man can change everything. That man can touch you until you tremble all over. That man can wake you up and allow you to breathe when life leaves you unable to catch your breath. For me that ONE MAN is Jax North. He's handsome, brutally so, and wealthy, money and power easily at his fingertips. He's dark, and yet, he can make me smile with a single look or word. He's a force when he walks into a room.

Our first encounter is intense, overwhelmingly intense. I go with it. I go with him and how can I not? He's that ONE MAN for me and what a ride it is. But there are things about me that he doesn't know, he can't know, so I say goodbye. Only you don't say goodbye to a man like Jax if he doesn't want you to. I've challenged him without trying. He wants me. I don't want to want him, and yet, I crave him. He tears me down, my resistance, my walls. But those walls protect me. They seal my secrets inside. And I forget that being alone is safe. I forget that there are reasons I can’t be with Jax North. I forget that once he knows, everything will change.

Because I need him.

​Because he's my ONE MAN.

One Woman
Emma and Jax came together in the midst of secrets and lies, but in a castle in Maine, they seek passion and sanctuary. What they find is a mystery that could stretch beyond all their expectations. And what Emma finds is danger.

One Woman begins where One Man ended, with Emma one step from death and Jax the only man who can save her.

Two Together (just released 1/21/2020)
The thrilling conclusion to the Naked Trilogy. He came into my life. He took me off guard, consumed me. Claimed me. But there is more to Jax North than meets the eye. There is more to this man than the way he makes me tremble, sigh, and even smile when I didn't believe I still could smile. And as it turns out the two of us together are far more than fire and passion. The two of us together threaten to expose a secret about Jax, and our families, that not even we know. A secret that someone doesn't want exposed. A secret that someone will do anything to hide.

These books are free with kindle unlimited or if you have the romance package through Audible.

Wasn't sure what to expect but something about the first book description pulled me in.  Jax is out for revenge for his brother's death and the best way to get it is to go after Emma Night the daughter of the man who he feels is responsible for his brothers death.  But once he meets Emma he realizes he can't use her instead he wants to protect her and trust her.  She doesn't seem like the rest of the Night family.

This is a good mystery that keeps you reading.  Who killed Hunter, Jax's brother and was Emma's brother involved? There are a lot of manipulations and corporate maneuverings this book making it all the more intriguing. More than just a juicy romance.