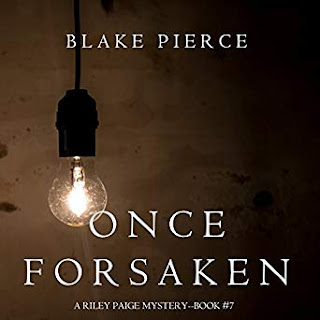 When Special Agent Riley Paige finally decides to take a well-needed rest from the FBI, a request for help comes from the most unlikely source - her own daughter. April's best friend is devastated by the death of her sister, a freshman at Georgetown. Worse, she is convinced that the suicide was staged, and that her sister was murdered at the hands of a serial killer.

Riley reluctantly looks into the case, only to discover that two other freshman girls at Georgetown recently killed themselves in the same grotesque way - by hanging. As she realizes foul play may be afoot, she brings in the FBI. The case takes Riley deep into the privileged campus of one of the world's most esteemed universities, into the unsettling world of the wealthy, and driven families, that pushed their children to succeed. In time she discovers that this case is far more twisted than it seems - and that she just may be up against the most psychotic killer of her career.

Blake took me on another unforgettable ride.  This time Riley Paige is investigating the deaths of several students at a prestigious college. All were labeled as suicides but something just doesn't seem right and as Riley's daughter points out the statistics are not in favor of suicide so something is amiss. Riley starts her unauthorized investigation into the deaths and it quickly becomes a sanctioned case.  As the "suicides" start to increase Riley hopes that they can catch the killer in time to prevent another one, however at what cost to Riley?

This is great because like the last one the killer is so ordinary. I really love this series but again I'm still not sure why they chose a British woman to read the audio book.  Don't get me wrong Elaine Wise is spectacular I just have a hard time remembering this is set in the US. Maybe if Riley has been a transplant from England I could understand but nope but really this is the biggest flaw.  I'm glad they have moved on from Riley being fired every book as well although the powers that be are still not in Rileys corner.