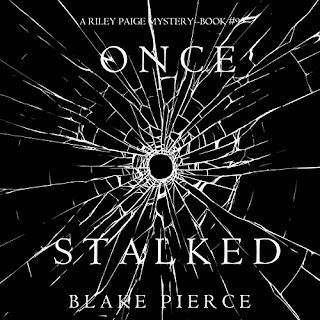 When two soldiers are found dead on a huge military base in California, apparently killed by gunshot, military investigators are stumped. Who is killing its soldiers, inside the secure confines of its own base?

The FBI is called in, and Riley Paige is summoned to take the lead. As Riley finds herself immersed in the military culture, she is amazed to realize that serial killers can strike even here, in the midst of the most secure location on earth.

She finds herself in a frantic cat and mouse chase, racing to decode the killer’s psychology. Yet she soon discovers she is up against a highly-trained killer, one that may, even for her, be too deadly an opponent.

A dark psychological thriller with heart-pounding suspense, ONCE STALKED is book #9 in a riveting new series—with a beloved new character—that will leave you turning pages late into the night.

This review took me a while to write I was too devastated by the end of the book.  This book wasn't as creepy as some of the others but very deadly.  One of my favorite characters was put in harms way and I'm not sure how I'm going to recover through the next few books.  This is definitely one of the darker books in the series.

People on a military base are being killed by a sniper.  But who could be doing it and what is the motive? There seems to be an underlying mystery going on at the base that no one is willing to discuss, and Riley Paige has to get to the bottom of it.

Well written this book keeps you going until the shocking finale.