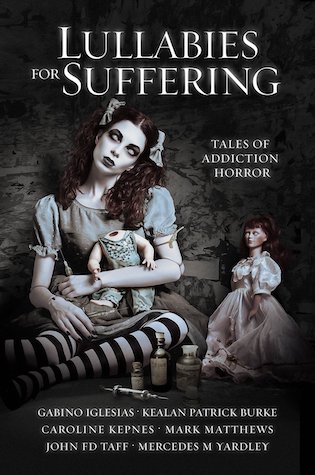 
“A plunge into the agony and the ecstasy, the inescapable nightmare of addiction.”
~ALMA KATSU, author of The Deep and The Hunger
Addiction starts like a sweet lullaby sung by a trusted loved one. It washes away the pains of the day and wraps you in the warmness of the womb where nothing hurts and every dream is possible. Yet soon enough, this warm state of bliss becomes a cold shiver, the ecstasy and dreams become nightmares, yet we can’t stop listening to the lullaby. We crave to hear the siren song as it rips us apart.

Six stories: three novellas, three novelettes, written by a powerful list of talent, all featuring the insidious nature of addiction–damaged humans craving for highs and wholeness but finding something more tragic and horrific on the other side.
FEATURING:
Caroline Kepnes author of You and Hidden Bodies
Kealan Patrick Burke, author of Sour Candy and Kin
Mercedes M. Yardley, author of Pretty Little Dead Girls
John FD Taff, author of The Fearing
Mark Matthews, author of Milk-Blood
Gabino Iglesias, author of Coyote Songs

“Each story uses different techniques and tropes from the genre resulting in a volume that is chilling and thought provoking.” ~Library Journal (Starred Review)

—
Lizard by Mark Matthews
“Do you know what I am going to do to you?” Agent Baker asked in a voice that had sunk seven layers deep.
Baker stepped forward. Amy had no room to retreat. She was fully cornered, exposed, and sat helpless as Baker took hold of her trembling hand. With a fingertip, she traced Amy’s vein, inching slowly from her wrist toward the sweet spot of the needle mark. She reached the syringe, grasped it inside her fist, then plucked it out.
Pluck.
“Do you know what I am going to do to you?” Baker repeated.
Amy shook her head, because she didn’t know.
“I am going to help you. You will never be sick again. Never.”
Never sick again. Never sick again—the phrase somehow made Amy’s fear bleed out of her body, and she looked up at Baker like a starving baby waiting to be fed. Baker was an infinite mother, a sexless lover, knowing her in ways never before possible. The feel of Baker’s fingertips had been surprisingly soft, warm, tender. It brought back memories of Joshua as an infant, his flesh pressed against hers when he was minutes old, fresh from her womb, moist with the miracle of life. The breastfeeding that followed was abandoned too early when dehydration hit.
But it was okay.
Joshua was going to be okay. Everything was going to be okay.
Baker held the needle with the tip sticking out between her fingers, and plunged the syringe towards Amy’s eye. Her eyelid snapped shut, but the needle poked right through the tiny film of skin. Pluck. She could hear it penetrating into her moist eyeball, the pain piercing as if she’d been stabbed in the heart. Baker tugged it out, just a touch, and then pushed it in deeper, right through her eye socket, again and again, until she finally pulled the needle out entirely. The syringe dripped with moisture.
“You’ve had your chance.” Baker attacked again.
Amy raised a hand but was too slow to defend her other eye when the syringe stabbed inside. A milky-white liquid mixed with crimson blood leaked out her eye, dripped down her cheek, then streamed into her mouth which had opened to scream. With each new stab, a new pitch out of her mouth, screaming Joshua’s name to help her, pleading apologies, rattling the bathroom walls with howls, sure that the gods would hear her pain and save her, but instead the snake bites of the needle came in rapid fire to all parts of her body. Baker pulled the needle out each time and found new, fresh skin to puncture.
Amy collapsed to the ground a ripped-open ragdoll. Her veins had been sliced apart, her flesh speckled in bloody red holes, her arms held out in front of her as if in offering. Her face was stuck in silent peace, a permanent sleep, the fluid of her life running in tiny red streams and puddling on the white tile. She’d been blinded and unable to see the bathroom door swing open and her son standing in the doorway, looking at her one last time before she died. 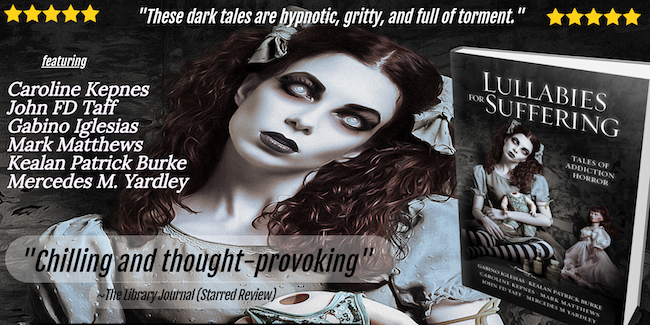