AUDIO BOOK REVIEW: The Deal, The Secret, The Choice (The Arrangement books 1-3) by Stella Gray 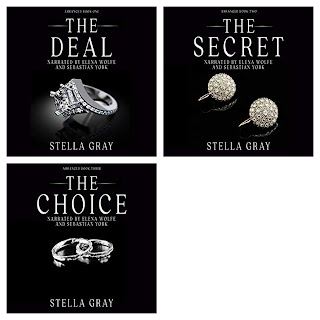 The Deal: On my 18th birthday my father, the senator, gives me the gift he thinks every little girl dreams of.

The man of my dreams, and the wedding to match.
Stefan Zoric is heir to an elite worldwide modeling agency. Practically a prince.
My arrangement is simple, as far as sham marriages go.
I give him my virginity, behave as the perfect wife and he'll pay for the college degree my father found irrelevant.
But I don't want to be the perfect wife.
I want him to want me the way I want him.
I want him to confide in me.
But Stefan has secrets that he holds close, dangerous secrets.
And soon I'm wondering what kind of devil have I made a deal with?

The Secret: On the day I was married, I promised to love, honor, and obey my husband, Stefan.
Little did I know how literally I would mean obeying.
Stefan tells me what to do, and I do it. There are questions asked, but I always submit in the end.
It would hurt less if I hadn't started falling for him.
It was supposed to be pretend. But the secrets we now share are too real, and they're crumbling every piece of who I thought I was.
If only Stefan was the man I thought he was.
If only I weren't so powerless.
But there's one thing I have that he wants.
My body.
And I'll do anything it takes to right the wrongs I've discovered.

The Choice: On the day my husband and I committed to each other, I didn't wear a white dress. We didn't exchange rings. There was no audience or minister to witness our union. Only the two of us.
We swore to put each other first, to take on the evils our families had perpetuated together. Side by side.
But that was before the past returned to haunt us.
Now, everything has changed.
Stefan can't have both his past and my future. I can't ask him to choose. And neither of us can do what has to be done without the other. It's an impossible choice, but we've run out of time.

On her 18th birthday the Senators daughter is told she is to be wed to her fathers friends son.  Stefan helps run one of the top modeling agencies but there is much more there than meets the eye.  Under the facade of modeling Stefan's father had run the biggest human trafficking operation in the US and he is looking to expand.

Stefan found out about the illegal activity of the agency his father runs when he was 18, and ever since he has been plotting his revenge.  He earned an MBA and is trying to turn the business around to make the business legitimate while unbeknownst to his father working to take down the trafficking side of things and send his father to prison.

Tori is naive to the max and sees Stefan as her way to a college education and while this seems a bit simplistic and unrealistic it is what it is.  These stories are mostly told from Tori's point of view. When her gorgeous husband doesn't seem to want to give her the time of day she sulks and turns to her step mother who is the perfect stepford wife to the senator.  She knows just how to behave and how to seduce.  She coaches Tori on being the perfect wife.

When Tori finds out what is really going on with her husbands business she flips thinking Daddy dearest will help her bring him down, when what she doesn't realize is that she was the pawn in a bigger game to keep the Senator in line and on the side of Stefan's father.  As her delusions shatter she is left to figure out what to do, does she stay with the man she has fallen for or does she leave and try to take him down.

When the two finally learn to trust each other things take a different twist and get a little better.  I still think Tori acts too much like a child to actually be of much help in these books I would rather have had her be a little more assertive and tougher, which I think still would have worked and not made her such a doormat.

Regardless she is trying to find her way in a game between ruthless men who will stop at nothing to keep the status quo.  I actually found these books to be entertaining despite wanting to throttle Tori several times.  I really liked Stefan and his struggle, so for that I am giving this 4 listening doggies.