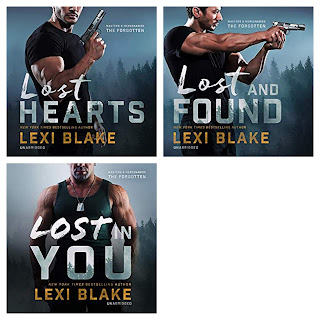 Lost Hearts:  Six men with no memories of the past
One leader with no hope for the future

A man without a past

Jax woke up in a lab, his memories erased, and his mind reprogrammed to serve a mad woman's will. After being liberated from his prison, he pledged himself to the only thing he truly knows-his team. Six men who lost everything they were. They must make certain no one else gets their hands on the drugs that stole their lives, all while hiding from every intelligence organization on the planet. The trail has led him to an unforgiving mountainside and a beautiful wilderness expert who may be his only hope of finding the truth.

A woman with a bright future

River Lee knows her way around the Colorado wilderness. She's finally found a home in a place called Bliss after years lost in darkness. The nature guide prefers to show her clients the beauty found in the land, but she also knows the secrets the mountains hold. When she meets Jax, something about the troubled man calls to her. She agrees to lead him to the site of an abandoned government facility hidden deep in the forest. She never dreamed she was stepping into the middle of a battlefield.

A love that could heal a broken soul

Spending time with River, Jax discovers a peace he's never known. Their passion unlocks a side of himself he didn't even know he was missing. When an old enemy makes his first move, Jax and River find themselves fighting for their lives. But when his past is revealed, will River be caught in the crosshairs of a global conspiracy?

Lost & Found: Owen Shaw and his “brothers” lost everything, their entire existence erased. Science had robbed him and all the Lost Boys of their memories and their past, but not their future. Hunted by every intelligence agency in the world, they are focused on two goals: find a cure for what was done to them and ensure that the technology that ruined their lives doesn’t get out into the world. Rebecca Walsh might be the key to achieving both. Owen has been studying her closely, living in her building, and he cannot resolve how such a beautiful, giving woman could have helped design the evil process that destroyed his past.

Dr. Rebecca Walsh has dedicated her life to researching the secrets of the mind. Her atmospheric rise in her field was fueled by the horror of watching her mother’s agonizing journey into madness at the hands of a disease with no cure. She vowed to never rest until she finds it. But obsession takes a heavy toll, and when Owen moves into her building she realizes how much of her life she has missed out on. Owen opens her eyes to a whole new world, filled with joy, laughter, and possibly love.

Owen and Rebecca grow closer, unraveling more about each other and the mysteries surrounding her connection to Hope McDonald. As the sinister forces working against the Lost Boys descend on Toronto, secrets long buried are uncovered that could shatter the bonds holding the Lost Boys together and cost Rebecca her life.

Lost in You: Robert McClellan was forced to serve as a soldier in a war he didn’t understand. Liberated by McKay-Taggart, he struggles every day to reclaim the life he lost and do right by the men he calls his brothers, The Lost Boys. Only one thing is more important – Ariel Adisa. The gorgeous psychologist has plagued his dreams since the day they met. Even as their mission pushes him to his limits, he can’t stop thinking about taking his shot at finding a life beyond all this with her.

Ariel Adisa is a force to be reckoned with. Her performance in Toronto proved she’s more than just a brilliant mind, but Robert still acts as if she is a wilting flower who needs his protection. Joining him on the mission to Munich should be the perfect opportunity to test their skills and cement their relationship. She and Robert are an excellent match. But when a stunning secret from Robert’s past is revealed, their world is turned upside down and nothing will ever be the same again.
While they chase dark secrets across Europe, Robert and Ariel realize that the only thing worse than not knowing who you are could be discovering who you used to be...

I am a huge fan of the Masters and Mercenaries series.  The Taggert crew are just as sarcastic and quirky as they always are which gives these books their levity.  While not as BDSM heavy as some of the other books these are really great reads.  The plot focuses on the Lost Boys, or those that were experimented on by Hope McDonald, who erased their memories to create super soldiers.  They robbed banks, and were subjected to countless torture sessions in the name of her "research". None of them know who they were, they were "born" in a lab.  Now chasing answers they know that they have a spy on the inside and need to weed the person out but there is dissent growing in the ranks.  Those who feel the CIA and McKay-Taggert aren't out for their best interest but only to keep them caged to use them for their own devices.

Sexy, with good story plots and a fantastic narrator who is fantastic at accents these are a really great listen.