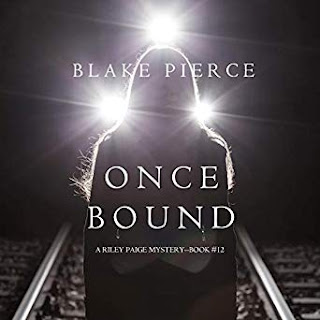 In this heart-pounding thriller, women are being found dead on train tracks across the country, forcing the FBI into a mad race against time to catch the serial killer.

FBI Special Agent Riley Paige may have finally met her match: a sadistic killer, binding victims to the tracks to be killed by incoming trains. A killer smart enough to evade capture across many states - and charming enough to go unseen. She soon learns it will require all of her faculties to enter into his sick mind - a mind which she unsure she wants to enter.

And all with a final twist that is so shocking, even Riley could not expect it.
A dark psychological thriller with heart-pounding suspense, Once Bound is book number 12 in a riveting new series - with a beloved new character - that will leave you turning pages late into the night.

Riley Paige is called in as women are being abducted and tied to railroad tracks. As she struggles to connect with the killer as she usually does she finds that she is getting absorbed in her work to the detriment of everything else in life.  She forgets Gilly's birthday and once again her relationship plays 2nd to her job. Her new team is also struggling to fit together. With too many secrets that can't be shared among the three of them I'm not sure this team can hold together unless someone decides they all need to trust each other even with secrets that could doom them all.  This is another fast paced novel that reminds me a bit of the Lincoln Rhyme books by Jeffrey Deaver.