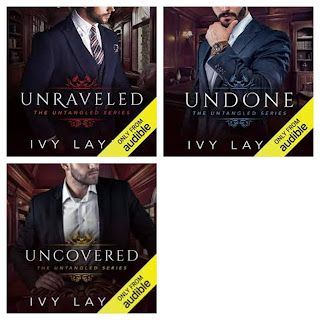 Unraveled: Summer
Evers Sinclair is dangerous.
One flash of that teasing smile, and I know he’s going to ruin me.
He makes my body shiver and my brain melt.
He’s also a huge mistake.
Girls like me don’t land guys like Evers.
But every time he knocks on my door, I let him in.
I thought we understood each other.
I thought we were playing the same game.
I was wrong.

Evers
I’ve never had a problem mixing business with pleasure.
Until Summer.
I was supposed to keep an eye on her, not take her to bed.
Once I had her where I wanted her, I couldn’t let her go.
I’m going to have to move heaven and Earth to win her back.
And that’s the easy part.
With the Russian mob after us and her father dragging us to hell…
I don’t just have to win her back, I have to keep her alive.

Undone: Lily
Knox Sinclair is a man of a few words.
Intense. Focused.
Touching him is a bad idea.
I already know that.
I know it and I want to do it anyway.
My life is a mess—A man is the last thing I need.
My dead husband left behind nothing but trouble.
Knox has answers, but he isn't sharing.
I don’t know if I can trust him.
I want to. I can’t afford to be wrong.
My body is begging for his, but I need to say no.

Knox
I don’t have to say a word and women fall in my lap.
I never wanted to keep one until Lily.
I saw her picture and I wanted her.
Now I can’t stop thinking about her.
I want to touch her.
Kiss her pouty lips.
Caress her sweet ass.
I’m here to keep Lily and her son safe.
And find answers
But trusting her… that’s a different story.
With both of our lives on the line, trusting Lily is my only option…

Uncovered: Alice
It started with a kiss.

No, that’s not right.
It started the day I met Cooper Sinclair, but I’d done a good job ignoring it.
There’s something about life changing pleasure that makes a man hard to ignore.
My attraction to him? I ignored that for years.
I had to.
After that one night of mind blowing sex, I can’t do it anymore.
I don’t want to.
Even if I should.
Especially since he's my boss.
Oops.

Cooper
Nine years.
That’s how long I’ve wanted her.
Since the day she stepped into my office.
She was off limits. Untouchable.
I filled my time with other women. Models. Movie stars. Socialites.
They meant nothing because they weren’t Alice.
Now that I can have her, I’m done waiting.
Alice is mine.
I just have to convince her this thing between us is real.
Not just sex. Not just a fling.
This is forever.
That’s what I want. Forever.
I might only get a few days.

Adin is a collector of historical erotica when he comes across a manuscript that is beautiful, but others are after it as well.  What he discovers is another world, a world of vampires, shifters, imps and more.  Donte wants the manuscript- its not just a book to him, its his personal journal about the love of his life.  The other man hunting it is his lovers son who wants to destroy it.  Adin is caught in the middle.

At first I thought this was just a vampire/human love story but it turns out to be so much more.  More in that you see Adin grow in the trilogy, realizing his entitlement and his flaws and how his headstrong ways are just putting people in danger. Its a vampire coming of age story.  I really enjoyed this series, with its twists turns and manipulations, I liked the other characters that flit in and out of Adin and Donte's lives and found myself wanting to smack Adin myself sometimes.