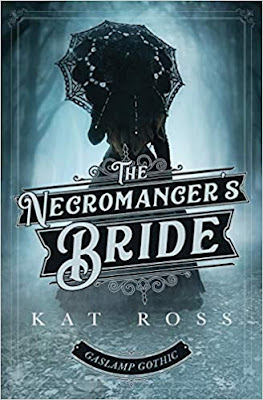 A self-appointed soldier of God with a penchant for ruthlessly punishing his enemies, he vanished after Anne Lawrence stabbed him with his own dagger. The smart thing would be to let him go.

Determined to heal the rift between them, she goes in search of her tempestuous former lover, black parasol in hand and daeva magic crackling at her fingertips. But Gabriel has his own plans afoot and Anne finds herself drawn into one of his tangled webs, much against her better judgment.

Gabriel’s nemesis has reappeared in Brussels, a vile slaver who’s plundering the Congo Free State with the blessing of King Leopold. Gabriel might be willing to give Anne a second chance, but not until Jorin Bekker’s head is lying at his feet.

Back in London, the quasi-reformed necromancer Balthazar sets his sights on the same quarry. He holds a very personal grudge against Bekker — and killing him might be the only way to keep Gabriel D’Ange from Balthazar’s own throat.

When the hunters collide at a lavish gala thrown by the king, Anne learns just how far she’ll go to save the man she loves.

Note: The Necromancer’s Bride is the sequel to A Bad Breed, which should be read first.

Bad Breed was the first of this series of read and I fell in love with this series.  I am fascinated by the magic and mythology of the characters.  This book starts where Bad Breed left off. Anne is on a mission to find Gabriel and hopefully convince him to forgive her for stabbing him. She has been alone for a long time and Gabriel stole a place in her heart and had her feeling a whole lot less lonely.

Balthazar tried to help bring Jorin down in Bad Breed and due to the failure of the coup he is determined to end Jorin on his own with the help of his servant whose family was murdered by Jorin. First Balthazar needs to get Jorin to trust him so he can get close enough to him to take him down which is not an easy task as Jorin is a very suspicious person.

Weaving together politics, history and magic this book keeps you on the edge of your seat until the very end and even then I'm left wondering what will become of some of these characters.  Well written with a good plot, I really enjoyed this book.  While you can read Bad Breed without having read the other books in this series you really need to read Bad Breed to understand the dynamics in this book.

Disclaimer: I received a copy of this book from Book Sirens

Discover other books or products I like: https://www.amazon.com/shop/readinggrrl
Labels: Gaslamp Gothic Kat Ross The Necromancers Bride