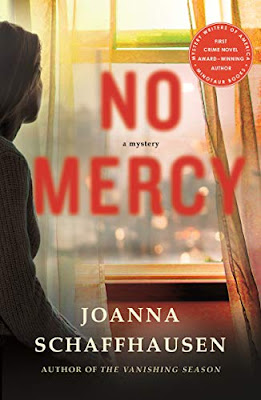 Police officer Ellery Hathaway is on involuntary leave from her job because she shot a murderer in cold blood and refuses to apologize for it. Forced into group therapy for victims of violent crime, Ellery immediately finds higher priorities than “getting in touch with her feelings.”

For one, she suspects a fellow group member may have helped to convict the wrong man for a deadly arson incident years ago. For another, Ellery finds herself in the desperate clutches of a woman who survived a brutal rape. He is still out there, this man with the Spider-Man-like ability to climb through bedroom windows, and his victim beseeches Ellery for help in capturing her attacker.

Ellery seeks advice from her friend, FBI profiler Reed Markham, who liberated her from a killer’s closet when she was a child. Reed remains drawn to this unpredictable woman, the one he rescued but couldn’t quite save. The trouble is, Reed is up for a potential big promotion, and his boss has just one condition for the new job—stay away from Ellery. Ellery ignores all the warnings. Instead, she starts digging around in everyone’s past but her own—a move that, at best, could put her out of work permanently, and at worst, could put her in the city morgue.

Now living in Boston Ellery is trying to piece her life back together after the fallout from the Corbin Copycat and the media getting wind of who she really is.  Now in mandated therapy she is asked to join a group of people who have been touched by violence.  Instead of dealing with her own feelings though Ellery goes back to what she knows, investigation.  Looking into a fire that happened over a decade ago and helping a fellow victim find her rapist.  To help Ellery turns to Reed Markham, FBI.

Ellery is definitely getting someone's attention, she gets shot at, her car set on fire and thats just the beginning.  It seems that when Ellery and Reed get together someone always winds up in the hospital.

Reeds boss has warned him to stay away from Ellery and away from the fire investigation case but when it comes to Ellery, Reed just can't say no.  Reed is finally starting to acknowledge his feelings regarding Ellery and Ellery can feel things stirring as well and they are freaking her out.  She is comfortable with the wall she has built for herself and feelings are difficult to handle.

This whole book is one big ball of tension ready to explode in the snowy cold of Boston.  I love these characters, their struggles, their conflicted feelings and not knowing how to handle each other.  Not to mention Speed Bump, Ellery's dog who loves to drool and leave dog hair all over Reed.