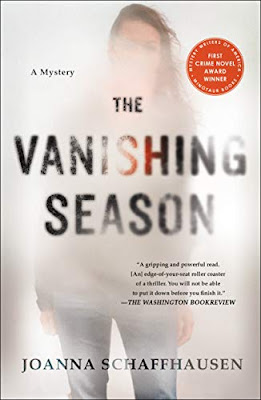 Ellery Hathaway knows a thing or two about serial killers, but not through her police training. She's an officer in sleepy Woodbury, MA, where a bicycle theft still makes the newspapers. No one there knows she was once victim number seventeen in the grisly story of serial killer Francis Michael Coben. The only one who lived.
When three people disappear from her town in three years—all around her birthday—Ellery fears someone knows her secret. Someone very dangerous. Her superiors dismiss her concerns, but Ellery knows the vanishing season is coming and anyone could be next. She contacts the one man she knows will believe her: the FBI agent who saved her from a killer all those years ago.
Agent Reed Markham made his name and fame on the back of the Coben case, but his fortunes have since turned. His marriage is in shambles, his bosses think he's washed up, and worst of all, he blew a major investigation. When Ellery calls him, he can’t help but wonder: sure, he rescued her, but was she ever truly saved? His greatest triumph is Ellery’s waking nightmare, and now both of them are about to be sucked into the past, back to the case that made them...with a killer who can't let go.

Wasn't sure what to expect from this book but I got hooked right away.  Ellery is hiding, hiding from a past that won't seem to let her go.  Now a police officer in a small town she is sure that there is a serial killer taking people.  Every July someone goes missing, but the people don't seem connected and they don't fit a standard serial killer profile so Ellery can't get anyone to listen to her. Believing that this is all connected leads Ellery to find a business card she hasn't looked at since she was 14 and lying in a hospital bed as the only surviving victim of a serial killer.

Agent Reed Markham saved Ellery (then going by Abigail) but not until after she had been tortured and brutalized for days, now Ellery is calling on him to help her save others.  Except Reed Markham is in a dark place, he seems to be doubting his talents as a profiler and has taken a leave of absence from the FBI, however a call from Ellery has him on a plane to do anything he can to help. Their lives are connected and he just can't seem to stop himself from wanting to save her again.

When evidence starts pointing to the case that Ellery and Reed were involved in 14 years ago, Reed isn't sure if Ellery is a target or if she could possibly be the perpetrator they are looking to find.  As Ellery's past starts to surface and the news vans roll into town  things get even more difficult for them.

This is a really well written mystery. I was hooked from the beginning and really appreciated how Ellery although alive still is very effected by what happened to her as a child.  Even Reed who has seen so much in his years with the FBI can't seem to shake his connection with her.  I love the connection these two share and their interactions.  I appreciate characters that are a bit broken and there is a lot of that going on in this book.  I was so hooked on these characters that I immediately picked up book 2 No Mercy.