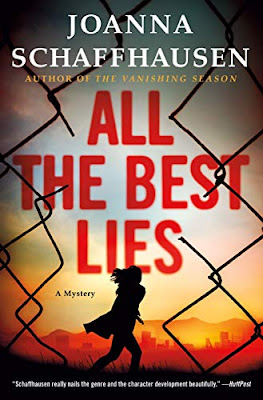 FBI agent Reed Markham is haunted by one painful unsolved mystery: who murdered his mother? Camilla was brutally stabbed to death more than forty years ago while baby Reed lay in his crib mere steps away. The trail went so cold that the Las Vegas Police Department has given up hope of solving the case. But then a shattering family secret changes everything Reed knows about his origins, his murdered mother, and his powerful adoptive father, state senator Angus Markham. Now Reed has to wonder if his mother's killer is uncomfortably close to home.

Unable to trust his family with the details of his personal investigation, Reed enlists his friend, suspended cop Ellery Hathaway, to join his quest in Vegas. Ellery has experience with both troubled families and diabolical murderers, having narrowly escaped from each of them. She's eager to skip town, too, because her own father, who abandoned her years ago, is suddenly desperate to get back in contact. He also has a secret that could change her life forever, if Ellery will let him close enough to hear it.

Far from home and relying only on each other, Reed and Ellery discover young Camilla had snared the attention of dangerous men, any of whom might have wanted to shut her up for good. They start tracing his twisted family history, knowing the path leads back to a vicious killer—one who has been hiding in plain sight for forty years and isn't about to give up now.

This time its Reed who needs Ellery's support and help. After seeing the results of a DNA test that proves that he is the biological son and half brother to the siblings he grew up thinking were his adopted family, Reed decides to re investigate his mothers murder.

While the mystery didn't really surprise me (I had it figured out pretty quickly) I really appreciated the peek into Reeds family life and the growing relationship between him and Ellery.  Reed's father is running for Governor and this investigation of Reeds could tank his campaign but Reed is determined to explore it. His findings are needless to say explosive and could have lasting consequences on the whole Markham family.

Ellery does what she does best, stir up trouble and boy does she know how to stir a pot.  Even though they left California solving the case and making a giant discovery there is one part of the case that Ellery still has a hard time letting go of and is still working on that I'm sure may crop up in future books.

Ellery's deadbeat father also makes an appearance after tracking Ellery across the country in the hopes for her help.  Ellery isn't sure what to make of this new news but she isn't jumping at the chance to have her father be a part of her life again.

I continue to love these characters and will continue to follow this series, but with Ellery being reinstated as a Boston Cop and Reed in DC I'm not sure what will happen to their budding new relationship.

Discover other books or products I like: https://www.amazon.com/shop/readinggrrl
Labels: All the best lies Ellery Hathaway Joanna Schaffhausen mystery reed markham