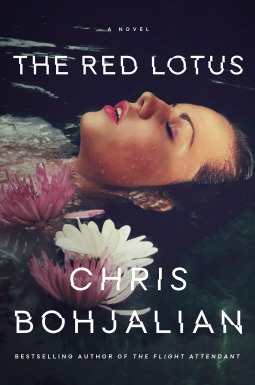 The first time Alexis saw Austin, it was a Saturday night. Not in a bar, but in the emergency room where Alexis sutured a bullet wound in Austin's arm. Six months later, on the brink of falling in love, they travel to Vietnam on a bike tour so that Austin can show her his passion for cycling and he can pay his respects to the place where his father and uncle fought in the war. But as Alexis sips white wine and waits at the hotel for him to return from his solo ride, two men emerge from the tall grass and Austin vanishes into thin air. The only clue he leaves behind is a bright yellow energy gel dropped on the road. As Alexis grapples with this bewildering loss, and deals with the FBI, Austin's prickly family, and her colleagues at the hospital, Alexis uncovers a series of strange lies that force her to wonder: Where did Austin go? Why did he really bring her to Vietnam? And how much danger has he left her in?

This is probably one of the most timely books I've read.  Austin and his girlfriend ER Doc Alexis are on a bike trip in Vietnam.  Austin has spun a story of wanting to visit the places that his dad and uncle were shot in the war but when Austin goes missing on his solo journey the truth starts to come forward.  His Uncle and dad were not injured anywhere near where they are in Vietnam and when Austins body is discovered after being hit by a truck there are strange wounds on his body.

Alexis unable to reconcile the lies and the strange way Austin died lead her to investigate his death once she is back in the states.  Unbeknownst to her the danger she is in is mounting and if she doesn't figure out what Austin was up to things could go from bad to worse.

I don't want to say too much but if you think COVID-19 is bad just know things could always be worse.  As usual Bohjanian delivers a very readable novel of betrayal and our willingness to let go and grieve.  The characters are well developed and relatable.  Definitely a great read.

Discover other books or products I like: https://www.amazon.com/shop/readinggrrl
Labels: Chris Bohjalian Pandemic The Red Lotus Vietnam