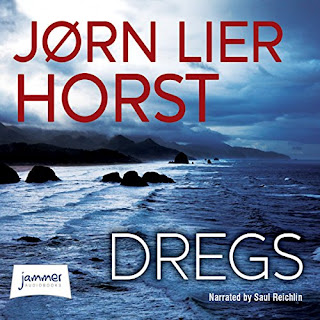 A severed left foot in a training shoe washes up on the shore in Stavern. Then another, and yet another: four left feet in a single week. Neither police Inspector William Wisting nor his journalist daughter Line have ever seen anything like this.

I stumbled upon Wisting the TV series on Sundance the other day and really got hooked and decided to locate the books the series is based on.  I feel the book version of Wisting is slightly different than the tv character it still felt familiar.  This is the first of the Wisting books that was translated into English although it is 6th in his series.

I really enjoy these Scandi mysteries and haven't read one in a while so it was a nice change.  Things move a bit slower and more like in a normal police investigation instead of the mad paced american type police procedurals.  Wisting is investigating the appearance the left foot of several older men  washing up on shore but is having a hard time connecting the cases especially when 2 women also go missing. He struggles to tie these people together while his daughter Line, who works for the big newspaper in Norway comes to town to do a story on people ex-cons, to see if prison does anything to deter or rehabilitate them.  Wisting isn't too thrilled with his daughter interviewing cop killers and other murderers alone but tries to tamp down his caution and remember she is grown.

I really liked this book and always find it fascinating to see how life in other countries plays out.  If you murder a cop in the USA you aren't getting out of jail, but in Norway one of the characters got out after serving 16 years and is living back in his home town.  So different and fascinating to me. Also guns are not the norm in other countries like they are here, so police work doesn't always look the same. I'm really excited to continue with this series.