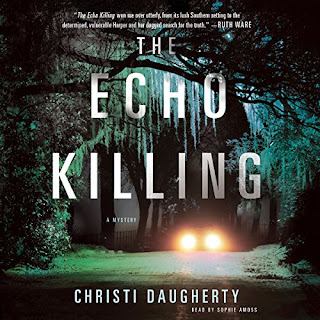 A city of antebellum architecture, picturesque parks, and cobblestone streets, Savannah moves at a graceful pace. But for Harper McClain, the timeless beauty and culture that distinguishes her home’s Southern heritage vanishes during the dark and dangerous nights. She wouldn’t have it any other way. Not even finding her mother brutally murdered in their home when she was twelve has made her love Savannah any less.

Her mother’s killer was never found, and that unsolved murder left Harper with an obsession that drove her to become one of the best crime reporters in the state of Georgia. She spends her nights with the police, searching for criminals. Her latest investigation takes her to the scene of a homicide where the details are hauntingly familiar: a young girl being led from the scene by a detective, a female victim naked and stabbed multiple times in the kitchen, and no traces of any evidence pointing towards a suspect.

Harper has seen all of this before in her own life. The similarities between the murder of Marie Whitney and her own mother’s death lead her to believe they’re both victims of the same killer. At last, she has the chance to find the murderer who’s eluded justice for fifteen years and make sure another little girl isn’t forever haunted by a senseless act of violence—even if it puts Harper in the killer’s cross-hairs…

Set in Savannah Georgia this is the first book in the Harper McClain Series.  Harper is a reporter for the local newspaper.  She sleeps with a police scanner and is constantly on the hunt for front page news.  When she is called out to a murder in a fancy side of town Harper discovers a scene that is very familiar to her.  As a 12 year old girl is lead out of the house after finding her mother dead Harper starts to flash back to when she was 12 and found her mother murdered on the kitchen floor.
Feeling that the two killings are connected Harper pursues this story with a vengeance hoping to solve not only this murder but the murder of her own mother.

Harper knows cops she has been a fixture at the local police station since she was 12 and the detectives all took her under their wing.  However Harper uses this connection to dig deeper into her mothers murder and may be burning some bridges along the way.

This is a great mystery, thriller.  Harper is very believable as the devoted journalist doggedly pursuing her story at all costs.  The mystery however may be opening old cases that are better left buried and Harper is finding herself in more and more danger. The emotions run high in this book and I felt myself getting very involved and invested in helping Harper find the killer.

I stumbled upon these books and I'm glad I did, I really love Harper's character, the hot all consuming weather and all the other characters.  This is a great start to a series.