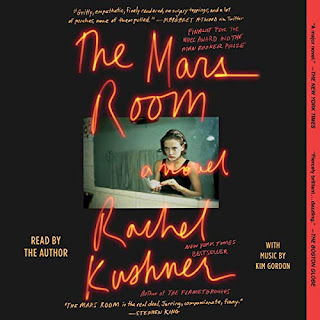 It’s 2003 and Romy Hall, named after a German actress, is at the start of two consecutive life sentences at Stanville Women’s Correctional Facility, deep in California’s Central Valley. Outside is the world from which she has been severed: her young son, Jackson, and the San Francisco of her youth. Inside is a new reality: thousands of women hustling for the bare essentials needed to survive; the bluffing and pageantry and casual acts of violence by guards and prisoners alike; and the deadpan absurdities of institutional living, portrayed with great humor and precision.

I've had this book in my TBR pile for a while and decided to give it a go while I painted my living room.  I was so drawn into this book that there were many times that I forgot that it was a novel and thought I was reading an autobiography. This is a bleak story told with gallows humor of Romy Hall who is starting 2 consecutive life sentences. There is no hope for her but she persists. Going through the motions and rules of prison life.  She recants stories of different people in prison with her and how her life was on the outside where she did have some hope, if only the bouncer from the strip club she used to work for didn't feel it was funny to give her address out to the guy she moved cities to get away from, the man who was stalking her.

Kushner nailed this character so well that it was easy to just get swept away in her tale.  The Mars room is a seedy strip club where women dance, give hand jobs and lap dances to men desperate for attention.  Half of the girls are high, poor and down on their luck.  This is not a pretty life but its better than turning tricks. Romy freely admits that her choices are what brought her to her current situation but that doesn't make it any easier.  From public defenders, over crowded prisons, guards who don't care and the strangeness of life on the inside you get a peak into this world.  This isn't Orange is the New Black...this is raw and desperate, yet Kushner keeps you reading and hoping for a different outcome.