BOOK BLITZ: The Omega Within (Alpha & Omega #5) by Carolyn Faulkner 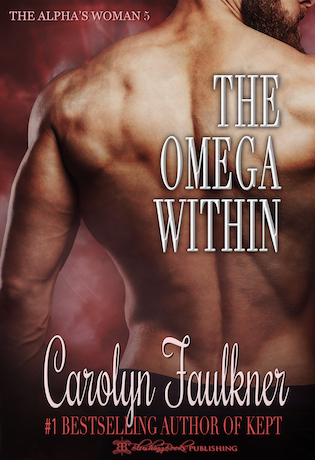 
Olly, dressed as a young boy to keep her identity as an unclaimed omega a secret, is searching for food when she is grabbed and taken to Garron, the great commander, to work for him as a bought and paid for servant. But when he discovers who and what she really is, he wastes no time in claiming her for his own.
Now, they must learn to exist as Alpha and omega while fighting the biggest fight of Garron’s life as a great warrior.
Enjoy how this fifth and final book in the Alpha’s Woman series brings together all the characters of the previous books for a spectacular ending.
Publisher’s Note: This action filled Alpha/omega romance contains graphic scenes and a theme of power exchange.

Goodreads / Amazon
—
EXCERPT:
“Commander,” Seen acknowledged as he entered.
There was plentiful food on the table, and his host was already seated, with a pretty little woman on his knee whom he didn’t bother to introduce.
She blushed furiously at him, though, because she was totally naked, trying to hide her face against him, but he wouldn’t allow it.
“Do I need to spank you in front of the doctor, little girl?” he asked—quite deliberately, he thought—which made her blush that much brighter.
“No, please, Sir,” she whispered.
“Show him your bottom.”
“Please, Sir!” Ollyah begged.
But he simply gave her that look she already hated that meant she could either obey him or she would be getting a spanking in front of him.
She hopped down off his thigh with severe reluctance and turned around.
“No, not there. Go stand next to him and bend over.”
Tears began to trail down her cheeks, but she did as she was told.
The backside that she revealed to him had been well and thoroughly tended to, from the first curves of her behind to just above the backs of her knees. He could see that the mottled bruises and angry red weals were from more than one punishment; they were in layers.
It looked like a very sore bottom indeed, and he could hear her sniffling and softly sobbing, but she remained in position.

Author Bio:
Carolyn was one of you as a kid, with the intriguing seeds planted in her head of the shivering thrill-thoughts that came with words like spanking, or discipline. As with you, those kinds of words and thoughts connected the heated blush of her cheeks with feelings elsewhere, which got more and more interesting the older she got.
I bet you know just what I'm talking about.
Like some, she started writing down these thoughts, escaping into short stories of reluctant heroes willing to take someone they love in hand when it's for her own good... and more shadowy thoughts as her imagination matured.
And like some, she started sharing her writings in newsgroups once she gained some confidence.
There's nothing like the perfectly-turned phrase, the handful of words that can make a feeling wash over you. And if you're reading this, then you have within you some intense feelings that most of the world doesn't understand -- but Carolyn does, and she writes those passions with wondrous abandon. Her specialties are Spanking Romance and Adult Ageplay, so we've grouped the many examples of her work that way.
Spanking Romance Classics are sweeping love stories which dare (in a very un-PC way) to allow their heroine to feel the special love of a strong man who will take her in hand when it's best for her. Carolyn writes very real, rich characters and stories that aren't just excuses to jump from spanking scene to spanking scene. If the timeless tango of pursuing ardor touches you, and the head-rush of Adoring Discipline intrigues you, then you'll love Carolyn's stories!