BOOK REVIEW: The Secrets We Bury (The Undertakers Daughter #1) by Debra Webb 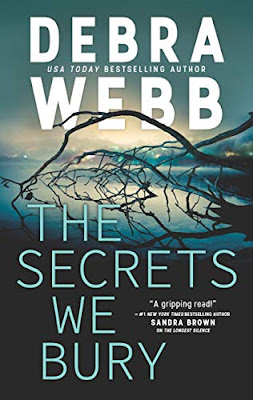 Doctor Rowan Dupont knows death. She grew up surrounded by it in her family’s Victorian funeral home, and it’s haunted her since the day her twin sister drowned years ago. Between her mother’s subsequent suicide and the recent murder of her father, coming home to run the funeral home feels fitting—even if it leaves her vulnerable to an obsessive serial killer.

Rowan refuses to let fear keep her from honoring her family. But the more time she spends back in Winchester, Tennessee, the more she finds herself questioning what really happened that fateful summer. Had her sister’s death truly been an accident? And what pushed their mother to take her own life? The dark lake surrounding Rowan’s hometown holds as many secrets as the bodies that float in its chilling depths. But Rowan is running out of time if she’s going to uncover the truth before somebody sinks her for good.

Rowan moves back to her small home town where she takes over since her fathers death as undertaker and running the funeral home that has been in her family for decades.  She is trying to put the past behind her but she is haunted by the serial killer Julian that for decades she thought was her close friend and confidant, instead it turns out he may have been stalking her for longer than she ever knew.

Now back in her home town she is starting to feel like her mind is slipping she is forgetting things and brooding over the loss of her reputation as a profiler, and the loss of a fellow officer and her father to the man who is still on the loose.  As she becomes entangled in yet another mysterious murder and stumbles upon the remains of a young woman near where her sister was found drowned Rowan starts to think that Julian has shown up in her home town but what he wants from her is what is most terrifying.

Creepy, and fast paced this story really delves down into what happened to Rowan's twin sister and why Julian may have his sites set on Rowan. I really like this series and although this is supposed to be book 1 I feel like the novella the Undertakers Daughter is a must read to really understand this book.

Discover other books or products I like: https://www.amazon.com/shop/readinggrrl
Labels: Debra Webb mystery The Secrets we Bury The undertakers daughter